Rhilochan School was closed during the 1960s. It had served the top end of Rogart parish and, over the years, would have an average pupil ratio of about twenty to one teacher. It was split into two sections by a curtain and the dividing rail can be seen to this day. There is a large old fashioned fireplace, but during the 1940s the local schools were issued with the iron “potbellied stoves,” which gave out a great heat. 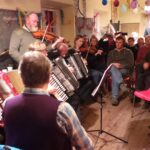 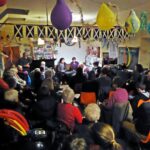 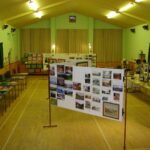 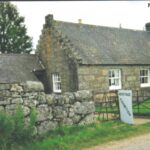 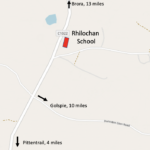 The school was also used as a social centre for the people of the area: their Christmas school concerts entering into local folklore. It was regularly used by the parish churches as an out-post for Sunday services. After closure it was used as a meeting place for dance evenings, the idea being to keep alive the traditional Scottish dances, then under pressure from the new “Rock and Roll” era. These events ran successfully for a number of years under the leadership of the McConachie family, then living at Dalreavoch. As the years went on they tended more towards strict Scottish Country Dance.

When in the 1990s the Rogart Heritage Society got going, it rented the premises from the education authority. The society uses it mainly as a meeting and function room, holding exhibitions and event weeks. The formula of having a talk followed by an informal ceilidh has proved very popular. Parking is much improved and a portaloo purchased. The school building is in need of work in the form of new windows and re-wiring. There is no water on tap so there are challenges ahead for the society to continue using the Old School.

The society also makes use of The Rogart Hall, especially in winter time. We have accumulated a vast store of information relating to the parish and it keeps growing. At the moment it is held by the Secretary but there is need for a parish archive store, especially for family medals and artefact. 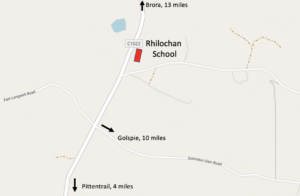