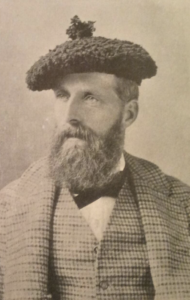 The Master of Blantyre

More often than not ‘the gentry’ did not leave a good impression on the folk of Rogart, but one exception was Walter Stuart, Master of Blantyre (1851-1895) who was remembered with affection in parish lore.

Born on 17th July 1851, as a young man Walter went round the world, climbed the Rocky Mountains, met with a few adventures, had some narrow escapes and saw some of the finest scenery in America, New Zealand and many other countries.

In 1879 the let of Sciberscross sheep farm was taken up by Walter Stuart, a flamboyant character and helpful to crofters in need. He was fond of a social dram and integrated well with the local people. He took a great interest in all parochial matters and was warmly accepted into the community, being elected to the School Board and made captain of the Rogart volunteer company.

The late Neil Gordon wrote that Walter remained at Sciberscross for 12 years and during his captaincy the strength of the volunteers advanced rapidly until it became numerically more than double what it previously was and by far the strongest company in the battalion. His kindness and unwearying helpfulness to the poor, and his frequent assistance to others in need of aid, secured for him the warm regard and sincere respect of all sections of the community.

In the winter and spring of 1879-1880, phenomenal snowstorms raged throughout the Highlands and were considered the worst weather in living memory. Many in Rogart, as in other localities, experienced great difficulty in producing fodder for their cattle and even if it had been available, did not have the means to pay for it. Many families found themselves on the verge of starvation and Walter was their means of survival as he battled throughout the winter to provide people with the essentials to see them through their suffering.

At a public meeting in Rogart, he was presented with an illuminated address and a silver salver with suitable inscriptions as tokens of heartfelt gratitude and the deep regard felt towards him by all classes in the neighbourhood.

Walter then purchased Eilanreach farm in the village of Balmacara on the north shore of Loch Alsh, directly opposite the Isle of Skye. He resided there for 10 years until his death at Balmacara House. He served the community as a member of the Glenelg Parochial School Board, as a County Councillor and a Justice of the Peace.

Crofters there also talked of his kindness and the consideration given to them in times of need. Two Glenelg shepherds remembered the time when the Master, sailing home down Loch Alsh, observed them and their dogs trudging along with tired feet many miles from Balmacara. He sent a boat to bring them on board the Eilanreach, and save them the toilsome walk over the mountains to their homes. The Master of Blantyre was a very religious man and was missed not only at Glenelg, but throughout the Highlands, Inverness and elsewhere.

He did much to improve Glenelg in the 10 years he lived there. He made a post-path from Ardintoul, kept it in repair and also got a daily post provided. He secured a telegraph wire by giving a large guarantee to the company. He built good houses for his shepherds and kept 3 pairs of horses that he did not require for himself, but used to plough the crofters’ lands for them.

He also grew potatoes, oats and turnips to give people employment; even though it would have been cheaper had he bought them.

Notice that the Master’s funeral would leave Eilanreach at 6 o’clock on the Monday evening was given in all different churches in the district and a large gathering assembled, notwithstanding a continuous downpour throughout the day. Tea was prepared for all, it having been the Master’s express wish, “Now mind, no whisky”.

At the appointed hour, the coffin was brought out and set down on the grass in front of Balmacara House amongst the people. Rev Wilson, minister of Kintail offered a prayer in Gaelic and after readings from the scriptures by other ministers, the coffin covered in the green plaid was carried by 24 men, in sets of eight, and followed by his household and friends, to the Eileanreach, which was berthed at Quarry.

Three ministers led the funeral, which was followed by schoolchildren from the Master’s School and over 200 people from the surrounding districts. There would have been many more mourners in attendance but for the terrible weather conditions, which prevented those from around Loch Alsh getting over the water.

Many tears were shed as the white boat sailed into the darkness on her way to Glasgow, from where the coffin was conveyed to the burial place of the family at Bolton, near Haddington. The Master of Blantyre was buried in the sarcophagus that stands in the Kirkyard of Bolton Church, close to the Blantyre’s family home of Lennoxlove House. 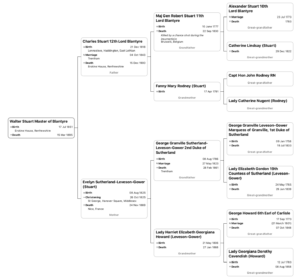 The Master of Blantyre’s Lineage

Walter Stuart, the Master of Blantyre only son of Charles Stuart, 12th Lord Blantyre, would have inherited the title on the death of his father. Unfortunately, he predeceased his father, dying on 15th March 1895 aged 44, and when his father died on 15th December 1900, the title of Lord Blantyre became extinct.

Acknowledgements to The Blantyre Project, the late Neil Gordon, Cath Boa and Red1st.com.