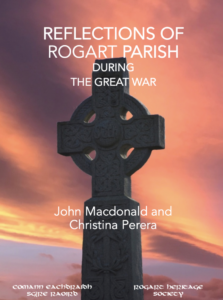 We can now send Reflections of Rogart Parish During the Great War overseas to New Zealand, Australia, Canada, South Africa and USA for an additional £5.50 to cover postage and packing per book.

We were just about to hold a cèilidh night to launch our latest book when lockdown shut down everything. As we’re still not able to host any sort of event we wanted to make Reflections of Rogart Parish During the Great War available now.

When we started the project back in 2018 we didn’t want to write a traditional narrative of the progress of the war or try to capture the full consequences of this epoch-ending period. Instead we wanted to show how the men, women and children of Rogart were affected and lived, or died, through the crucible of the Great War.

Our historian, John MacDonald, had collected material over the decades. He had studied the rolls of honour and asked questions of folk who had personally known those who had served. So our new book includes tributes to the men of the Rogart who fought in the war. Their family members have donated photographs and shared their ancestors’ stories.

We also draw on letters home. Written by soldiers at the Western Front they reveal the day-to-day concerns of the men. They also show how travel broadened their horizons. Astonishingly some of them managed to explore parts of France and southern England, almost as tourists.

The book also dips into contemporary Highland newspapers. The local press recorded celebrations of medal winners and the funerals of those men who were buried locally. The papers also reported on the shortage of manpower as a result of the men’s absence and the work of women and children to support their menfolk.

During the research we have also tracked down men whose names appear on the war memorial at Pittentrail but whose connection with Rogart had faded from general knowledge. We identified a number of these ‘unknown soldiers’.

The book is now for sale in the Post Office store at Pittentrail for £7.
Or we can post it out if you don’t live locally – additional cost of postage and packing in the UK is £2.40. The cost of sending outwith the UK will be publicised shortly.

If you would like to buy a copy please send us a private message using the Contact button at the top of the page and we will get back to you:

Sutherland Estates used to own dozens of sporting lodges in the county and John MacKay, Tordarroch has gathered together pictures of them (new and old). Some were grand, others quite simple, the variety of architecture and location is outstanding.

Even if you have seen his slide show before it has been updated and more pictures added. A fascinating night is expected.

Musicians – please come along, we’d all love to hear you play!

Saturday sees our (somewhat belated) Annual General Meeting.
The agenda is below as are the minutes from last year’s AGM. We won’t be printing them in order to save paper, but will project them during the meeting.

The short AGM will be followed by a slide show of “new old Rogart pictures” which have been donated or collected over the last year. There will be a raffle, light refreshments and a house cèilidh. We will be collecting membership fees and issuing membership cards.

Please come along with your voice or instrument, bring a raffle prize, and find out what has been going on since our last AGM.

Saturday 14 September 2019 saw local historian and author, John Macdonald being recognised for his contributions to the community and university by being awarded an Honorary Fellowship at St Peter’s and St Andrew’s Church, Thurso .

John Macdonald has also collected an archive of photographs, stories and artefacts which were used in his many public talks and guided walks.

His careers as railwayman and postman as well as his life-long residence in Rogart has given him an enviable network of informants and an intimate knowledge of place, attributes which most professional historians lack.

He was instrumental in the development of the Sutherland Accordion and Fiddle Group as well as Rogart’s heritage society.

He has encouraged many people to understand more about their local history and the archaeology of the ground beneath their feet. He also a mentor of postgraduate students, helping to show how they can apply their theoretical knowledge to “on the ground” evidence

A short Annual General Meeting will be followed by a slide show.
Please bring your instruments and play along after light refreshments and a raffle.

Double event for your diary

Our next event will be held at Pittentrail Hall and should be ‘magically’ different!

There will be light refreshments and a raffle. Please bring your instrument, if you play.