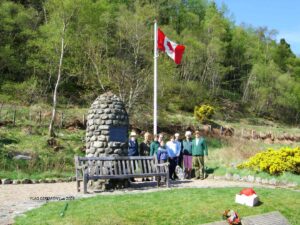 The cairn at Dalmore is dedicated to Sir John A Macdonald, the first Prime Minister of Canada.

Although he was not born in Rogart, the parish always maintained a close affiliation with his role in the establishment of Canada as a nation: his Macdonald ancestry being regarded as being “of the parish.” The cairn was built on the site of his grandparents’ house at Dalmore, using the nearby local stone, and built by Golspie tradesmen. Sir John’s father, Hugh was said to have been born at nearby Rovie Craig to where the family had gone prior to moving to Fourpenny in Dornoch and hence to Glasgow and eventually Canada. The site of the cairn at Dalmore was where Sir John A’s grandfather lived.

There is no indication that Sir John A Macdonald ever recognised his connection to the parish.

Impetus for a memorial

The erection of a commemorative cairn was often talked about: Col Gilbert Gunn of Inchcape advocated for one in 1922 and wrote about the Macdonald connection to the parish, using information from local historian Andrew Mackay of Dalmore.

Further impetus came from the efforts of another Rogart man who had gone to Canada in the 1920s and had “done well.” He was Hugh Macpherson, whose people were in Blairmore. Hugh had influence in Canada and in the world of pipe music. He had a famous tartan shop in Haymarket, Edinburgh, and served on the City Council. Hugh got the Sutherland County Council on board: the councillor being George Murray of Morvich.

Also supportive was Joyce Rawstorne, the then landowner of where the cairn was to be built. Support also came from another influential Rogart figure of his day, Captain John Mackay of Corry. John Mackay was a distant relative, his mother being a daughter of Macdonald, the last tacksman of Dalmore. She could remember hear of Hugh Macdonald being in Rovie. 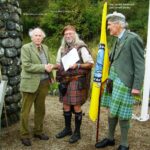 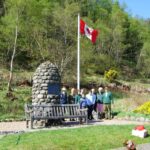 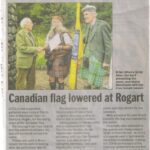 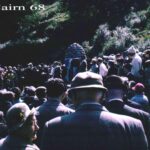 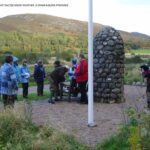 View from behind the cairn looking over to Dalmore 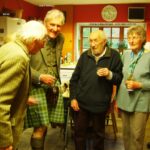 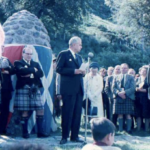 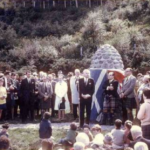 On 13 July 1968 the opening ceremony was a grand affair with over a thousand people attending. Bonar and Ardgay Pipe band were on parade and the 13th Canadian Prime Minister (1957-63), John Diefenbaker, whose people were cleared from Kildonan, unveiled the cairn.

A small pot of money was set aside to look after the small monument, but when this ran out, Brian Gibson of Kinnauld carried on looking after the cairn on his own initiative. When the Heritage Society got going, it helped Brian look after the cairn. By now bi-annual ceremonies took place. A flagpole had been acquired and the Canadian flag was raised in May and taken down for the winter come fall. These ceremonies no longer take place.

Relatively recently people have become aware of the dark side to Macdonald’s premiership, particularly his treatment of the indigenous peoples, the Chinese Immigration Act, the scandals and bribery. The Prime Minister’s bloody past, with its dreadful consequences for the people of Canada’s First Nations, are now better understood and a cairn in his honour would not be built today.