“My father used to say the standing stones marked the grave of chiefs killed in a clan battle and the stone cairns used to cover the dead.” John MacDonald, Little Rogart 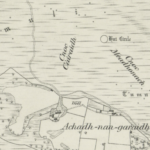 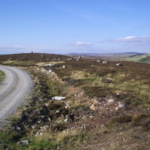 Standing Stones Between Glenelg and Achnagarron 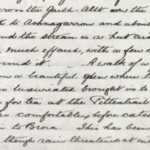 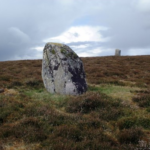 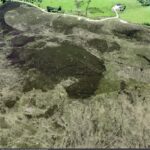 But John is skeptical and thinks this may be poetic licence. So what is known of the site? It has been subject  to reinterpretation throughout recent history.

Volume 34 of The Ordnance Survey Place Names Books (1871-75) must include one of the messiest, and most revised pages in its reference to Achnagarron (see here). As well as a number of spelling variants: Achnagarien, Achadh nan Garaidhean and Achnagarron, it records that “This name is much too long to write without plans.” and then goes on to enumerate:

“This name applies to two small farms, the dwellings are one story high, slated, and in good repair, a short distance North of Achnagarien are to be seen the Remains of what is supposed to have been a Hut Circle, as well as a great number of Tumuli. See under Cnoc Meadhonach in page. His Grace the Duke of Sutherland, proprietor.” 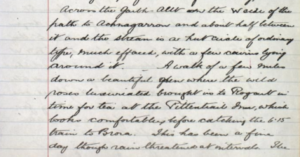 “Immediately to the E [East] of the most Southerly area of enclosed land at East Langwell on the rising ground above the Garbh-Allt is a small group of cairns of usual type. Across the Garbh-Allt on the W [West] side of the path to Achnagarron and about half between it and the stream is a hut circle of ordinary type, much effaced, with a few cairns lying around it.”

The first recorded visit by RCAHMS in 1911 tells us how to find these ancient stones 100 yards North East of the most westerly croft at Achnagarron. Described as two standing stones “which look as if they might have been members of a stone circle. They stand about 95ft apart in a direction pointing 70 E of N. The most easterly stands about 5ft high, and is about 2ft 6ins wide at base, roughly quadrangular in section, and pointed at the upper end. It leans slightly to one side. The second stone is some 4ft 8ins high, 2ft 3ins across the base, and is also pointed.”

A few years later, In 1920, H F Campbell’s Caithness and Sutherland (p 135) reinterpreted Achnagarron as an elaborate hut circle thought to be a homestead of the prehistoric period. The stone circle theory was further debunked when a surveyor, in 1981, noted that because they occur at different heights some 30m apart it is therefore highly unlikely that they represent the remains of a stone circle.

Leaping forward to 1995 there is a evocative description of the area by RCAHMS:

“Two standing stones, situated about 30m apart, and a spread of small cairns are situated on a heather-covered rise to the N of Achngarron. The ENE stone (NC 7329 0498, ROG95 921) stands 1.6m high, is 0.8m square at the base, with its faces presented to the cardinal points of the compass. It leans to the S and there are packing stones visible at the base of the stone. The WSW stone (NC 7327 0497, ROG95 922) is 1.3m in height, subrectangular in section, and measures 0.9m from N to S by 0.6m transversely. The small cairns extend for a distance of up to 140m from E to W by 60m transversely along the spine of the hill on which the standing stones are set.” 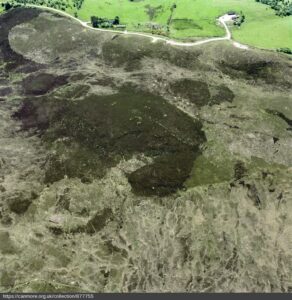 Cnoc Cairaidh, Achnagarron, oblique aerial view, taken from the North East, centred on an area with hut-circles, a field-system and possible cord rig. Standing stones and a building are visible in the top right-hand corner of the photograph.

Today Canmore lists Achnagarron simply, but still with some ambiguity about its age: “Cairnfield (Period Unassigned), Standing Stone (Prehistoric)” So, it appears that the hut circle theory has come, so to speak ‘full circle’ – the stone circle interpretation has fallen out of favour. But what remains is enigmatic and worthy of taking the time to see.