The music can be downloaded, for a fee, from Lee and Sons 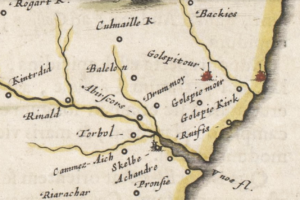 Strong grew the oak and green grew the Bere.
Sleek were the cattle, grazed without fear.
Glad was the song of children at play.
Sad were the tidings that bore them away.

Gone was the trust of the chief to his clan.
Gone were the days when he`d need an armed man.
The Claymore no longer it vengeance would reap.
Its chapter was closed, was the dawn of the sheep.

I see it so clear, as on a fine day.
The world’s mighty ocean the breadth of a bay.
The fire blackened stone on Aberscross green.
The Oak Tree my witness to what I have seen.

Time like a mist, on mountain descends.
Deeds they grow dimmer as memory ends.
In mind’s eye I see will yet dawn the day.
When the hillside will ring to the children at play.