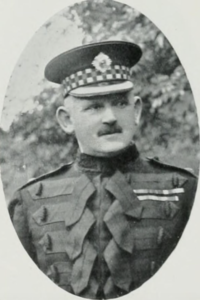 Thomas Alexander Ross was born in Rogart in 1871, the third son of Thomas Ross and Helen Soutar née Scott. Thomas Ross Sr was a painter and decorator by profession but became the Drill Sergeant of the Rogart Volunteers.

As Regimental Sergeant-Major of the 1st Battalion Scots Guards he won the Distinguished Conduct Medal in the South African War. In 1917 he was awarded the Military Cross and was mentioned in despatches four times during the First World War.

One unusual story from his service abroad was that he saved two cows from a shelled field and named them Bella and Bertha. The cows were brought back to the UK and they took part of the parade in London at the end of the war. When Bella died one of her hooves was ceremonially presented to Major Ross. 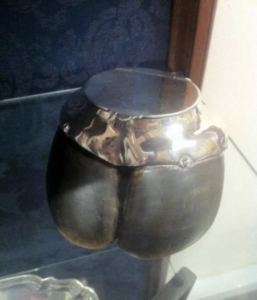 Thomas married Ada Earley in 1903. Together they had five children who were born in various places according to where Thomas was stationed.  Thomas and Ada’s two sons both joined the Scots Guards. Sadly Alexander, the older of them was killed in action during the Second World War.

After leaving the Scots Guards Thomas Ross became the Secretary and General Manager of the Chevrons Club, a post-war club facility for non-commissioned officers. In 1922 his picture appeared in a book ‘Notable Londoners, an Illustrated Who’s Who of Professional and Business Men’.  In this he proudly stated  his link to Rogart.

“In his native town – Rogart, Sutherlandshire – Major Ross is justly regarded with pride, for his record brings distinction to the place where he was born as it does to himself.”

Thomas subsequently returned to Scotland and owned The Culbin Sands hotel in Findhorn. He then retired and lived the rest of his life in The Cabrach. Following his death in 1938 all his medals and gifts were donated back to Scots Guards where they are on display in the Officers Lounge of the Scots Guards Club at Wellington Barracks in London.

Thanks to Jo Brimble for sharing her tribute to her great grandfather.