We are indebted to John Moffat of Trials Guru for generously sharing his research on the motorcycle trials that took place in Rogart staring during the 1960-70s. 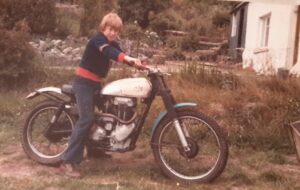 Back in the mid 1960s and up to the late 1970s, there was a unique event organised in the rural county of Sutherland in northern Scotland. It was called the ‘White Heather Trial’ promoted by the Sutherland Car & Motor Cycle Club and was the most northerly permitted motorcycle trial in the United Kingdom.

Held on a Saturday because of the deeply religious area being predominantly Free Church of Scotland which scorned sporting activities on a Sunday, the organisers respected this and therefore capitulated.

This allowed the Lochaber club, based in the Fort William area, to organise a Sunday event where the Free Church influence was not quite so strong and this made for a unique trialling weekend in the north of Scotland. This created a weekend of events in the Highlands of Scotland, not a two day event as such, but two days with events.

Centred at the hamlet of Rogart, which means: ‘great enclosed field’ it was a somewhat dispersed crofting community with the nearest village being Golspie, some nine miles distant. However Rogart does have a railway station and this had opened up the area somewhat over the years.

Scibercross Lodge was built in 1876 and was one of the many hunting lodges built for, and by, the Third Duke of Sutherland.

The Grant Brothers – The Prime Movers:

Whilst there were a number of local club members that assisted in the running of the trial, the prime movers of the Sutherland & District Motor Club, White Heather Trial were undoubtedly the Grant brothers, John and Bill. 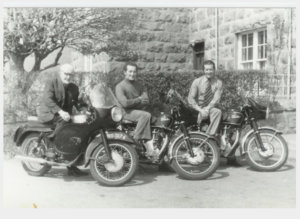 The Grant twins of Rogart & their father, Ian

John was the older and Bill the younger, twin sons of Ian Grant and Jessie Magarry, born on 4th July 1928 at Dalmore, Rogart.

The family home called ‘Rowallan’ was built in 1889. Ian Grant moved along the road to the Bungalow when he married Jessie as his father was still Rowallan. They were only out of Rowallan for a year or two, but it was never bought. This is where the Grants ran their grocery business for many years.

They lived in Rogart all their days, the only exception being the time they spent in the Middle East during a stint in the obligatory National Service.

John and Bill left Rogart to train at Catterick Garrison in North Yorkshire, serving as motorcycle dispatch riders as part of the Royal Signals, until 1949. They then returned home to help their parents run the family business.

John and Bill Grant’s connection with the Scottish Six Days Trial began with Bill becoming an observer in 1967. This was followed by a commitment as Chief Marshall before Bill became the Assistant Secretary to Ally Findlay where his in-depth knowledge of the event was invaluable.

The SSDT ‘influence’ was evidenced with the type of competition numbers allocated to competitors at the White Heather. The riders had a large numeral on black background fixed to the front and nearside of their machines in the late 1960 events. An idea taken from the SSDT at that time.

Not ‘medically identical’ twins, the Grant brothers were fiendish practical jokers. Some may remember the pranks that John and Bill played when they took their turn at attending the SSDT in alternate years, because the ‘absent one’ stayed at Rogart to run the family business in the village. Many people, including riders and officials didn’t realise there were two Grant brothers, because they were so alike in both appearance and mannerisms!

Daughter of John Grant, Mairi, former SSDT Secretary told Trials Guru: “They generally took their bikes down to the SSDT at Fort William.  They would head down the main road to Beauly, then cut over the top to Drumnadrochit before heading on down to Fort William, a delightful run even today”.

The Grants had a preference for Velocette road motorcycles, which led to them to convince the marque owners club to hold their national rally at Rogart, run in the August.

Trials Guru’s John Moffat: “I got to know Bill and his twin brother John through the friendship they struck up with my late father, many years before I found myself working with Bill in the SSDT office at the Milton Hotel in 2002. When I was 18, I observed at the SSDT in 1976 and Bill was Chief Marshall that year and his nightly ‘Briefing Meetings’ were a mandatory part of the duties and that was where he imparted his direction and knowledge to the officials and observers.

Bill’s advice was always positive and he was a very knowledgeable chap to have on call as his experience gained through many years helping both Jim McColm and Ali Findlay, indeed steered me through a very adventurous week in Fort William in 2002.

We had great fun in the office, as he always had some story or other to tell in the short lull between the workload. As most of the stories he told me involved previous Scottish Six Days Trials, I must say I was always enthralled by them! He usually began his ‘lesson’ by saying the now immortal words: ‘Now, let me tell you this … ‘

I for one listened intently to what Bill had to say for this was the time to learn. I didn’t interrupt him. He had such a relaxed style that anyone who ignored him probably did so at their peril and no doubt came ‘unstuck’ shortly after!

The motto should read: When an experienced person speaks, it pays dividends to listen.

The Grant brothers have now passed into Scottish Trials folklore, they were true motorcycle enthusiasts”.

Competitors’ memories of the White Heather: 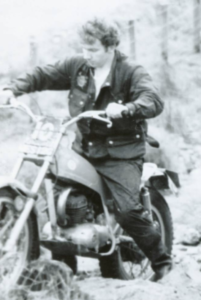 KK hits a spot of bother

“The bike you see in the photo came from Donald Buchan dealership in Perth, most of my bikes were from either Donald or Jimmy Morton at Sorn, Ayrshire. My memories of the White Heather are that it was a great trial and one I rode many times. The one thing that I remember well was riding with Allie ‘Beag’ Cameron and ‘RM’ – Roger Mount, Allie affectionately called us by our initials.

We were looking a difficult section up on a steep hillside, that no-one was cleaning. After looking at it for a while, Allie told us how to ride it. Approach quite fast in second, shut off power till you reach here, then give it a wee squirt here and shut off again, then another and so on. I can’t remember how many ‘wee squirts’ were needed but there were quite a few. Allie then gave us a ‘master class’ on how to do it. Allie was a brilliant rider, needless to say neither ‘RM’ or ‘KC’ followed his example”. – Kenneth Cameron, Fort William 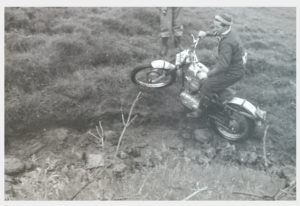 Bill Grant draws on B&H whilst tackling a climb

“I remember the White Heather trial. I think I did it twice and recall it was held on a Saturday, so that meant either a day off or a half-day on Friday to travel up to Sutherland. I was based in Airdrie then so it was quite a trek with a trailer.

I well remember riding round and coming into a village and there was a Policeman standing in the middle of the road waving the trials bikes through! The first and only time I recall this happening. Then we had a lunch stop which again was unusual and the village hall was filled with cakes, sandwiches etc made by the local people. Everyone seemed to be involved!

When the White Heather was finished it used to be a rush back South to Fort William where there was another trial on the Sunday.

The weekend involved two bed & breakfasts and a lot of miles to cover but it was once a year and I remember it very fondly”. – Tommy Sandham, Magor, Wales. 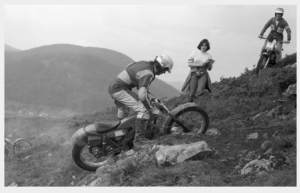