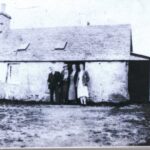 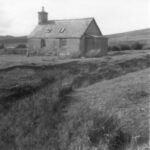 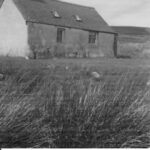 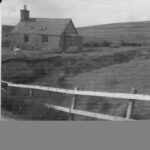 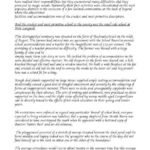 The teaching job was mine

I first attended West Langwell school, aged five, in April 1940. By the time school opened after summer holidays I had had an accident and spent most of the next two years in and out of hospital with only brief spells in school. My memories are hazy but I recall mesh being put over the windows to save them from shattering in the event of bombing. I remember counting with an abacus and learning to write on a copy book. When I finally came home from hospital I was sent to Rhilochan school until the 4th June 1945 when a car started conveying the pupils to Rogart school.

My mother attended from 1904 to 1913. At that time pupils had to bring a peat for the fire. In the 1950s the school was used on Sunday evenings for church services.j

The teaching job was mine at £60 per annum!

The eldest of a family of five, I have just finished my secondary school education and had dreams of going on to train as a French teacher, but I was needed at home so my dreams had to be forgotten.

Then one day I read in our local newspaper (The Northern Times, printed and published in Golspie, Sutherland) an advertisement for a side-school teacher. I applied, and after a few weeks with no word, apart from an acknowledgement of my application, I decide I would go to see the Director of Education in Brora who was, at that time, the late much-respected Hugh A Ross.

Feeling very nervous on entering the great man’s office (I was only nineteen) I sat down as requested and could hardly take in his words: “Out of a shortlist of nine applicants you have been accepted – your duties will begin at the end of August; your salary will be £60 per annum; your Supervisor will be the Headmaster of the main school in the parish and the terms will be notice of one month on either side!“

In no time at all it was the end of August and I began my teaching life. I had to cycle 6 miles to my school each morning and 6 miles home each night. The school day began at 10am and finished at 4pm.

School was just a small building with two windows in one wall and a porch at the outside bottom end – this very small vestibule held such a lot – pegs on the wall for outdoor clothing, mop and bucket, brushes, bucket for water from the well over the road – somehow here too, boots and shoes could be put during the day. The porch also served as a break from the cold wintry blasts and added an air of cosiness.

The heating was a square sort of iron stove with a pipe going through the end wall – a big strong fireguard stood in front of it which, in wet weather held wet clothing and stockings to dry and steam away during the school day and, hopefully, be dry enough of the scholars to put on to go home at night. Some of the children had long distances to walk and weather was the greatest hazard – especially in the winter months.

The number of pupils varied a little. I do remember that the highest number on the register was 19, eleven girls, eight boys – the lowest number would have been 10.

Teaching was quite a challenge as the children’s ages varied from five years old up to 11 or 12 years when the Qualifying Exam was taken. (In later years this was called the Central or Eleven Plus), then the successful pupils chose whether they wanted to go on to take secondary school education, normally in Golspie or turn off at that time, or stay on in that wee school.

I feel proud and happy to say that during my seven years there three of my girl pupils “went on” while some of the successful boys decided to stay with me! They were for me truly happy days – I love the work and I feel, in hindsight, there was a strong bond of feeling between my borrowed family and myself.

Because of the differences in ages there was several classes – Standards we called them then, around 1932 – and it followed that there could perhaps be three infants, maybe one, two or three in each of the other groups up to Standard 5 and that entailed teaching all subjects – I doubled, even in giving the older pupils some introductory lessons in French!

Every day began with scripture at work, then reading, writing, arithmetic, geography, history and sewing for the girls. Some of the boys learned to knit scarves and, I think enjoyed it a little bit!

All the different subjects and classes had to be put in some sort of array whereby no one subject or child was neglected or perhaps a better word would be “discouraged”. It was a warm and caring little world when, every day, to me, anyway began with a feeling of pleasure and anticipation of achievement in passing on any knowledge or wisdom I possessed.

Every morning there was copy-writing went each child such an carefully copied out the top line on to the rest of the page. I remember impressing on each the importance of the up-light and down-heavy strokes was so strongly advocated at the time and which, I must say, lead to many pupils of my generation and afterwards being really good handwriters.

Then each day there was either transcription or dictation. Several times weekly we dealt with Grammar from “parsing” to “figures of speech” with some poems and reading thrown in for good measure. Then, too, there was mental arithmetic (with the children back to back so there could be no copying) with slate and slate-pencil at the ready! Also there was a daily lesson in the arts of adding, subtracting, multiplying and dividing. For the older ones my Supervising Headmaster gave me several copies of test papers of past qualifying exams – they were very helpful, and to me most interesting booklets.

Time, in a full schedule, was found for the arts – singing, drawing and painting and drill, though not quite an art but good for the well-being.

I taught my pupils all sorts of songs, mainly Scottish, but some Irish and even some Music Hall favourites. They were hymns and songs and paraphrases which we sang and learned together in our little one room school. Becoming interested in Gaelic singing as a learner and member of the local Gaelic choir I tried to teach some of my pupils and felt very proud to have my competitors when several awards at the Provincial Mod which was held in the Drill Hall, Golspie. I, the teacher, could only attain a third prize for solo singing!!

(My next few lines make me smile as I remember!)

I had a cheque for £5 pounds paid to me every month – sent from Brora Education Office. Now, at that time cheques as such, while total not totally unknown, were rather thin on the ground! My only difficulty was where to cash my salary! We had no local bank, the shops were few to the acre so I tried the local hotel – the lady hotelier was very willing to cash my cheque for me but, also, she was very generous – and insisted that I should drink a glass of sherry which she brought me on a tray! Although quite unused to knowing the taste of drink then I’ve got to say that I came out of there feeling afraid to breathe on anyone I spoke to in case they thought I had been drinking!

These long-gone days were, for me, anyway truly happy days, with a great feeling of satisfaction. And it has been good through the years to hear some news of pupils I have taught.