The auction mart came to Pittentrail in 1936, started by Dingwall auctioneers Reith & Anderson, and served the parish and surrounding areas for the rest of the century.

It began as a result of 5 local farmers (Peter Boa, Sciberscross, George Campbell, Eiden, Angie MacKay, Achvoan, John MacKay, Corry and Nathaniel Murray, Morvich) approaching the auctioneers, inviting them to start a mart at Pittentrail. Reith & Anderson told the men that if they could find 2,000 lambs to sell, then they would put on a roup. 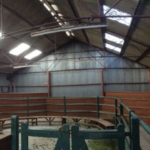 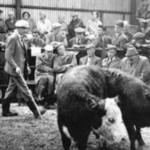 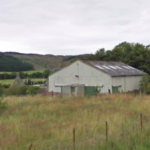 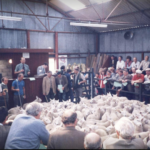 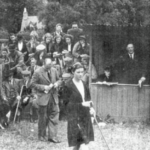 Initially Corry Meadow was looked at for a potential site, but it was agreed that the land where the pens now stand would be best suited. The first couple of decades involved open air auctions, with a hut for the auctioneer and a simple wooden ring. The land was leased from the hotel croft and the small number of pens grew in line with the increasing business with up to 12-14,000 lambs bought and sold.

Up until the early 1960s it was a familiar sight to see flocks of sheep being driven from the mart to the station loading bank, to be herded into freight vans ready for the run south.

In the 1950s there would be 77 lambs in each wagon and as many as 44 wagons organised. About a dozen wagons would be filled, an engine and brake van would be sent from Wick or Helmsdale to head a special train heading south.

However, with the development of road haulage and improvement in lorries, the rail portage of livestock dwindled away. Road haulage had the advantage of being able to deliver direct onto farm or mart. Lairg (at the crossroads of the north) provided a central point for farms across the north and smaller roups at Forsinard, Brora, Helmsdale and elsewhere disappeared.

Rogart’s Mart also saw changes in ownership over time as companies came and went. Reith & Anderson were replaced by MacCallums and finally United Auctions, of Dingwall.

Around 1958 it was decided to give the Mart more permanence and the current building was constructed which involved the purchase of land. The building constructed in the late 1950s has not really changed to what stand there now.

Each year saw a regular round of sales, so farmers and crofters would select the best opportunity for selling their livestock and buying in new blood.

The Mart as a Gathering Place

Whilst cattle and sheep were bought and sold at the mart, there was also an associated social side. It was a day out, chance to renew acquaintances and a spectacle for the visitor. The ringside would be full of people, with the serious buyers at the front and the larger, less involved audience sitting behind watching everything.

The local hotel had its own bonanza as deals were drunk to, good prices celebrated and bad prices commiserated upon.

The Mart has also been by the Rogart community – a religious service is held in it to mark the end of the annual Gala. This recognises the importance of the venue as central to the main concentrations of the population.

The 2001 Foot & Mouth Disease crisis was a major blow to the livestock production industry in general, but to livestock auction markets in particular. For almost 13 months livestock marts were closed, due to various bans on the transportation of livestock to combat the disease. In the end the Rogart mart was another victim of the foot and mouth outbreak because its wooden pens and dirt flooring were no longer deemed suitable for use. Raising the site to modern standards was considered too expensive and it closed its doors for business in 2001.