There are few more isolated settlements than Braegrudie today, but once it was a hive of activity. 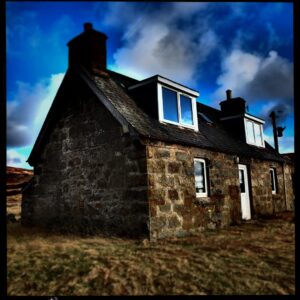 Canmore describes Braegrudie as a “large area of depopulation containing the footings and remains of eighteen buildings, three kilns and associated enclosures. The buildings vary in size from 26.0m by 4.0m to 7.0m by 3.5m with walls up to 0.6m high. The township comprised six unroofed buildings and a system of boundary walls”.

After the arrival of sheep farming Braegrudie became a hirsel on the Sciberscross sheep walk where the MacKay family shepherded for decades and a typical shepherd’s cottage was built to house the man and his family.

When the sheep farm was broken up, around 1930, Alltamhuilt, Braegrudie and Dalbreac hirsels were given to the crofters of Langwell who formed the Sciberscross Sheep Stock Club, initially keeping shepherds in all their hirsels. After 1941 only one shepherd was fully employed in Braegrudie along with part time shepherd Bobby Matheson of Banscol.

Today a pedestrian footbridge over the River Brora leads to the house. Vehicular access is via a ford through the river. 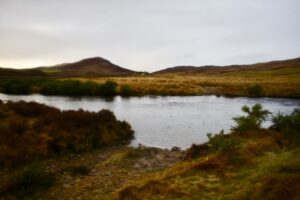 The Modern Antiquarian, visiting the house describes his trip: “Crossing the impressive water course by a foot bridge (marked upon the map) I arrive at the house to find no-one at home, stark windows glaring at the unsolicited visitor to, in turn, solicit unfounded notions of being watched by unseen eyes.” 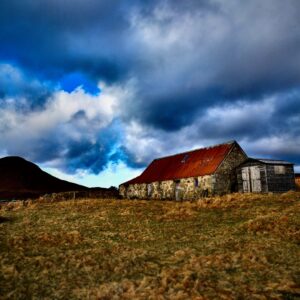