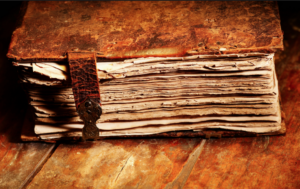 Rogart Heritage Society is very fortunate to hold a copy of the diaries of the local Schoolmaster William Campbell. The diaries were given to us by Carol Grant when she retired as the teacher.

In fact the diaries reveal comparatively little about Campbell’s routine school work (“school as usual” is a frequent entry), but he describes a great deal more about contemporary crofting and farming life.  As well as teaching and administering the school, the Schoolmaster was also active in researching local history and amateur archaeology. He also had to keep animals and grow his own food. How many schoolmasters of today have a milking cow?

The diary itself is amazingly small, but is full of historic significance. Campbell recounts many aspects of the parish now long forgotten and he writes of the people whose houses now lie in ruins.

But it is also his observation on current and world affairs, visits to main cities of Edinburgh etc that give us the context of a rapidly changing world. Campbell reports on the interesting people that he meets, including local personalities, his motorcycling to visit side schools, his fancy for Mrs Mackenzie, the Minister’s wife and teacher in Rhilochan. These are part of the rich tapestry woven in glorious prose.

Contemporary school inspectors and their reports on the main and side schools under Campbell’s jurisdiction are described as is the soup kitchen (more of which will feature in a future page). His writing reveals an insatiable curiosity about Gaelic, music, archaeology, history and ancient artefacts, to name but a few.

Where is the diary now?

The diary was donated to the Highland Archives in 1999 and is in Inverness library. If you wish to see it you will need to call in advance and arrange to view.

The Heritage Society received a grant from the Gordonbush Windfarm Fund to transcribe and preserve the diary in digital form. This has taken over a year’s work but is now preserved digitally. When transcribing the diary our historian, John MacDonald (Little Rogart) helps us to understand the local context and provides some explanations.

John’s qualifications for so doing are his encyclopaedic knowledge of the parish, its people, the history and its inter-connections.  Perhaps of most significance to the success of the job was that Mr Campbell was John’s father’s schoolmaster and he had grown up with Campbell’s sons. In his youth John often heard mention of Mr Campbell: “My boy you should be glad it was not Campbell that you had,” was frequently commented when John had done some misdemeanour.