Leatty, Lettaidh, Letty, Lettie or even Leudaichte, its spelling is variable. The name applies to an area of the parish,  a burn, and also an archaeological feature (Lettie’s Grave). It is a haunting place, everywhere the evidence of people and their activity over many centuries. 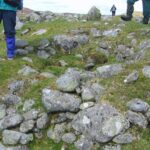 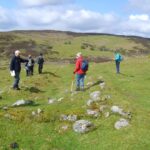 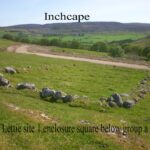 Lettie is a prime example of a site that has not changed much since it was last occupied and worked under the old runrig system some 200 years ago. In many former settlements it is now difficult to identify just where the head dykes, buildings and kilns were; on Lettie, however, these are still very visible.

The map reveals a collection of house and field remains, including marvellous examples of longhouses, a threshing barn and enclosed areas for growing crops. The setting is a rather lovely valley with a river and mixed woodland, the timber from which would have been used by the inhabitants.

Richard Boyle, for Scotlands Rural Past and also work done by Richard Tipping of Stirling University identified four named settlements one being Balvraton.

Our historian, John Macdonald walked Lettie one Sunday and pictured all the house sites he could find – about 30 in all. Lettie was divided into four hamlets, John was able to trace them and found them as on the map above.

But how did the township, or hamlet fall into disuse and become abandoned?

The ownership of Lettie is somewhat murky. Unlike much of the neighbouring land, which was subject to clearance by the Duke of Sutherland and his factors, Lettie was not owned by the Sutherland family in 1814.

Lettie was sold by Murray of Aberscross to Sutherland of Morvich in 1665. It was owned by the Sutherlands of Kinauld/Rearquhar during the 18th century. However, their financial difficulties meant that creditors often enjoyed the rents to the lands or were essentially in occupation. The messiness and confusion we are left with is typical of the holdings of many of the smaller landlords of 18th century Sutherland.

William Munro of Achany acquired Lettie in 1811 by buying up debts affecting the lands. This appears to have been a move to protect the Sutherland’s property (the families were connected by marriage). It is doubtful if Achany bought up all of the debts although he acted and may be regarded as owner of Lettie. In 1819 he sold the lands to the Marquis of Stafford, with consent of the surviving heirs of Sutherland of Rearquhar. Officiating at the sasine ceremony was Hugh MacLeod pensioner residing Leattie (one of many army pensioners in Sutherland).

The Marquis of Stafford brought summonses of removal against the tenants of Lettie in 1819 (the Marchioness was not named as a pursuer as the lands had been bought by her husband and were not part of the Earldom lands she had inherited). Those summoned: George Matheson, Angus Matheson, Colin Sutherland, James Sutherland, George Murray, John Murray, William Campbell, James Gordon, James Mackay, Marion Campbell relict of John Sutherland, Lilly Munro, Lilly MacLeod, John Mackay, Ebenezer Sutherland, James Matheson, Adam Murray alias Bain, all in Lettie, and Angus Murray in Achnatongue, Donald Murray in Lubinin, Robert Murray in Ledanririe, and John Mackay in Toscary (the latter are four small holdings on marginal ground which were treated as part of Lettie). The number of tenants matches the number against Lettie given in the list of townships cleared in 1820. It would appear that the tenants of Lettie were given the same advantages as other tenants removed at this period on the Sutherland estate and did have to remove until 1820 (they would have occupied rent free for 1819 to 1820 but would not have been allowed to sow any crop in 1820).

By the 1840s Lettie was part of one of the sheep tenements of Strathfleet, also known as Blarich Farm. Since then Lettie has been silent, but for the bleat of sheep and the occasional round of the shepherd.

Glen Matheson wrote to us: “My Matheson ancestors left the Bratten of Leatty in 1818 and settled in Earltown, Nova Scotia. A Munro family came from there at the same time.” (John Macdonald suggests ‘Brattan’ might equate with Balvraton.)

Another source, David Craig’s On the Crofters’ Trail describes a clearance which might have taken place in 1814 – the Year of the Burnings: “They are putting fire to Lettaidh. The people have been put out.” It goes on to say: “All the men from Lettaidh had been recruited, by the Sutherland Estate factors, to go to fight in the Napoleonic wars, and then the factors seized the chance to evict the women and children without fear of resistance.”

Other people had left Lettie earlier still: John Campbell and Jane Graham, left Lettie in 1804 along with their 2 children, Robert (aged 4) and Janet Lily (aged 2). They journeyed to Pictou, Nova Scotia and settled in Rogers Hill. This intriguing archaeological feature fits in with a style of burial which dated it roughly to a period between 500 AD and 800 AD in that its size and layout, with four upright corner stones, can be found from as far north as Unst (one of the North Isles of the Shetland Islands) to as far south as Yorkshire. A close analysis of comparable small barrow cemeteries has dated them to this period, which we associate with the Picts. Another very good example is to be found on the Isle of Eigg and also in South Uist, although the barrow grave at Lettie has corner stones more prominent than most.

There is an indication at Lettie that this was not a single burial but that there were two or possibly three similar graves in close proximity, but that they have succumbed to interference at some time in the past.