During the two World Wars millions of women contributed to the war effort – both at home and in uniform. Not only did they give their sons, husbands, fathers, and brothers to the war effort, they gave their time, energy, and some even gave their lives. 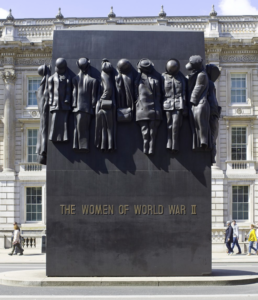 Amongst these woman was Colina (Connie) Gordon of Rogart – one of comparatively few women whose names are recorded on local war memorials.

Before the war Connie had worked at the Lawson Memorial Hospital in Golspie and she was described as a kind and loveable girl, kindly and obliging in her manner.  She was called up and became a Driver in the Auxiliary Territorial Service. Ultimately her health failed her and Connie died, aged 21, in Edinburgh.

For her family, this loss did not end their sorrows, for Colina’s sister, Annie MacKay Gordon was to die two years later in Aberdeen, aged only 18 years. Both daughters has died from Pulmonary Tuberculosis. 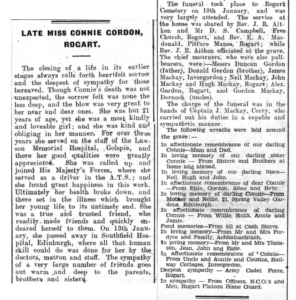 Thanks to Jean Sutherland, Elgin for providing information on Connie Gordon.