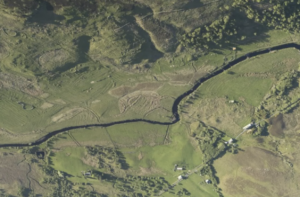 According to an account from 1966 the deserted township of Grudie contained between forty and fifty ruined buildings from 0.3m to 1.8m high, and measuring from 5.8m by 3.1m to 32.3m by 3.0m. Associated with these were numerous dry-stone enclosures, some of which were attached to the ruined buildings, two corn-drying kilns and many old field walls and banks. To the South of the settlement, and on the flat plain North of the River Brora were extensive areas of lazy beds and field clearance. Much of this can be seen in Canmore’s (National Record of the Historic Environment) aerial photograph, above.

Roy’s 18th Century military map (drafted after The 45) shows the area to have significant settlements. 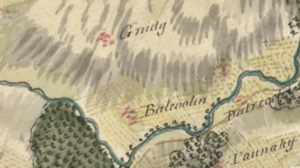 The late George Murray (retired shepherd, Morness) knew much of the local history and folklore of the district and was interviewed by the notable ethnographer Calum MacLean in 1955 as well as informing Canmore of important local features. George recounted that Grudie was depopulated in 1822-3 on the orders of Lt-Col Sutherland. In particular it is believed that its mill was burned when Grudie was cleared.  The land was subsequently used for sheep farming, and by 1823 only one house remained occupied by the shepherd (a Mr MacKay). In one of the recordings with Calum MacLean, George spoke of a former mill.

A replica mill was built in Morness by Lt-Col Sutherland of Grudie. George Murray 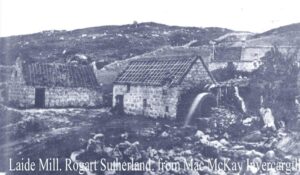 The image above shows Morness Mill c 1880s, still working. Its dimensions were the same as the mill on Grudie.

Unfortunately the Grudie mill is no more, having being demolished recently and the water source is now used for electric power. However, the mill site is still very recognisable with its associated water system. Is a perfect example of a prosperous pre-clearance settlement.  Grudie mill was said to be the best mill in the district and very important as an example of a pre-clearance vertical mil. The next mill was below Inchomney. 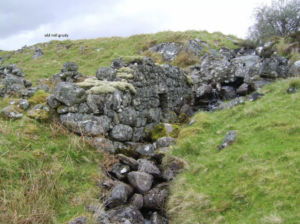