We are indebted to Dr Elizabeth Ritchie, University of the Highlands and Islands, for allowing us to reprint her 2013 articles on Major John MacDonald (1721-1812). 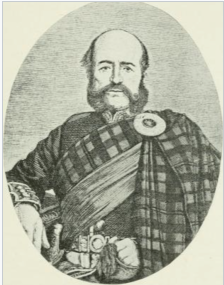 In Rogart, on the 7th of May 1721, a little boy was born to the MacDonalds and named Andrew.  He was educated at the parish school where he would have learned English as well as arithmetic, and perhaps some of the classics.  After five years there, when he was probably in his early teens he went to work on the farm.  This did not suit him.  He apparently became ‘dissatisfied with the hard, monotonous toil’.  At the time the East India Company was recruiting in the Highlands.  He and some relations, probably also young men, fancied the adventure and possible profits of trying for their fortunes half way around the world.

Andrew MacDonald of Rogart fights the War-Elephants of Bengal

He was sent to Calcutta where he enlisted with the military wing of the EIC.  It was a good time for a healthy, ambitious young man as the Company was expanding its reach across India.  For several years he was ‘employed on most active and arduous work’, the ‘constant turmoil’ agreeing well with the ‘rugged and trusty contingent of Scottish Highlanders, of which Macdonald was a leading spirit’.  He was lucky to avoid rampant diseases such as cholera which struck down even healthy young men.  After ten years his ambitions were satisfied and he was promoted to the office of Military Inspector.  This entailed him supervising three distant trading outposts of the Company.  He seems to have performed well here also as he was then made a Superintendent of the Convoy and Defence Department which sought new trade.  This was an exhausting and responsible role which involved travel far away from Company headquarters.  It was also dangerous, as the EIC’s techniques were frequently coercive so were not always welcomed by locals.  It is not clear what trouble Andrew got into, but several times he was badly wounded.  The work, travel and fighting combined with the severe climate in the interior of India eventually took its toll and he was sent back to Scotland to recuperate.  In 1754 he returned to India and resumed his former position.  Within three years he participated in a crucial event in India’s history.  The battle at Plassey was really more of a skirmish, but it was crucial to the East India Company’s triumph over its French rivals and to the establishment of British rule in India.

Siraj-ad-daula, the young Nawab of Bengal had, with a vast army, taken Calcutta from the EIC in June of 1756.  The Company headquarters in Madras did not hear of this until August when they dispatched Lord Clive with a 2,500 strong mixed European-Indian force.  Clive drove Siraj’s army out and replaced him with Mir Jafar, a puppet ruler.  Siraj’s spies caught scent of the conspiratorial discussions and moved south to Plassey.  Clive also moved with 2,000 Indian sepoys, 600 British infantry, and about 200 artillerymen with ten field pieces and two small howitzers.  At some point during these manoeuvres, Andrew MacDonald from Rogart had joined the force.  Clive’s men were outnumbered and his council of war voted against action.  After an hour or so meditating in a grove of trees, Clive changed his mind ordering the army to move to Plassey.  In History Today magazine Richard Cavendish describes what happened:

“The confrontation came on a cloudy morning north of the village of Plassey on the bank of the Hughli river.  Clive’s army was drawn up in three divisions, as was the Nawab’s army of perhaps 40,000 men with its war-elephants and more than 50 cannon.  One division was commanded by Mir Jafar.  After an opening cannonade, a crash of thunder at noon heralded a torrential downpour of rain that lasted half an hour.  The British artillerymen quickly covered their cannon and ammunition with tarpaulins, but the enemy failed to do the same and their artillery was put out of action, so that when the Nawab’s army moved forward, assuming that Clive’s cannon were also out of action, it was met with a withering storm of fire.  The enemy withdrew and Siraj, who distrusted his generals and had already been warned of impending defeat by his astrologer (who had possibly been bribed), lost his nerve when Mir Jafar advised retreat.  When Clive’s army attacked again, Siraj fled on a fast camel.  His demoralized army followed suit and when the British entered the enemy camp at about 5pm, they found it abandoned.” 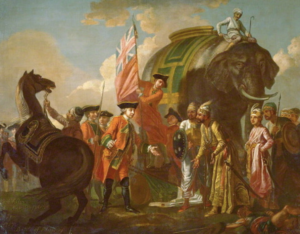 Clive reported that he had only lost eighteen men and he estimated that his opponent had lost 500.  Siraj was killed by his own people and was replaced by Mir Jafar.  As he had planned, Clive operated the strings of his puppet ruler, gaining control of Bengal.  Andrew MacDonald almost paid a high price for helping Britain gain control of India.  He was severely wounded at Plassey and left on the field as dead.  He was rescued and sent back to Britain as an invalid.

Andrew MacDonald of Rogart fights the French in Canada

Andrew MacDonald not only survived the severe injuries he sustained fighting the army of Siraj-ad-daula at Plassey under Clive of India, but he survived the long sea voyage back to Britain to recuperate. He recovered with his military and imperial ambitions undimmed. His employers, the East India Company, helped him to buy a commission in the Scottish Regimental Contingent which was being recruited to serve in North America.

By the 1750s, Britain and France were at war. The two nations fought everywhere that they had political and economic interests: in West Africa, India, the Philippines, and in North America. The North American struggle broke out in 1754 over the allegiance of the aboriginal people of the Ohio. Defeat there prompted the British to take on the French in their Nova Scotian territories. The French had a major military and commercial fort on the coast of what is now Cape Breton. It had been captured ten years earlier by the British but returned in exchange for Madras in India. Early in 1758 Andrew MacDonald was sent to assist with besieging the Fort of Louisbourg. The French garrison resisted for just long enough to prevent the British from marching westwards to invade Quebec that year. However, British naval superiority prevented the French government from reinforcing the fort with men, munitions and supplies so it was not too long before MacDonald and his comrades captured Louisbourg. Following their victory he was moved south to Halifax where the British were building up their military presence. The man from Rogart was soon moved westwards to join the force which sailed from the fort he had helped capture, as J.M. Bumsted explains. The series of

British attempts to seize Quebec … did not prevent another major expedition under General James Wolfe … The largest and best-equipped military force that North America had ever known assembled at Louisbourg over the winter of 1758-9 while the frozen ice of the St Lawrence isolated the French.  The British force consisted of 8,600 troops, most of them regulars, and 13,500 sailors aboard 119 vessels, including 22 ships of the line and five frigates.  This great armada required six days simply to clear Louisbourg harbor in early June 1759.  On 27 June Wolfe landed his army on the Ile de Orleans without serious French opposition. There followed over two months of skirmishing.

Andrew MacDonald and his comrades knew time was running out – the massive British fleet could not overwinter in the St Lawrence. At the end of the summer troops found a path up the cliffs leading to the plain above. They sneaked past the French sentries and the rest of the British troops followed them. The French commander, Montcalm, made a tactical error. Rather than waiting for reinforcements he decided to attack the British who were in formation on the plain. The French ranks broke, but not before both Wolfe and Montcalm were killed. The British took Quebec. There were many months of negotiations, but it was the victory at Quebec which marked the British domination of North America and the decline of France as a superpower. 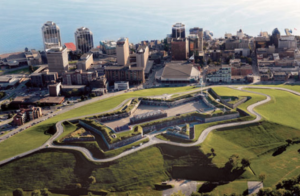 The Citadel (British fort) at Halifax, Nova Scotia, where MacDonald spent much time.
Permission to use this photo kindly given by Nova Scotia Tourism Agency: photographer R. Garnett

The capture of Quebec was also important to MacDonald personally. It earned him a promotion to Captain and a return to Halifax. His climb up the ranks continued and in 1766 he became a Major in the 59th Regiment. Rather than returning home when he retired on full pay in 1770, he remained in Halifax. He had settled there and had many friends among the Scottish merchants of the city. The year after his retirement he joined the North British Society and for the next quarter century he was an active and enthusiastic member of this philanthropic club. He is described rather formidably as having a ‘powerful and robust personality’! MacDonald worked to develop the burgeoning colonial town of Halifax. Despite having been settled in the colony of Nova Scotia for thirty years, in 1798 he decided to return to Scotland. For the final decade of his life, until his death in 1809, he lived where he had been born, in Rogart.