Emerging from the peats of Rogart

In 1876 a Medieval bog person was dug from a grave in the peat at Springhill, Knockan, Rogart. As well as a body, the grave on the moor also contained a woven shirt, a brogue and a cord.

PV Glob’s seminal book ‘The Bog People’ catalogues a number of notable discoveries of similarly preserved people. Many of the bodies described were Iron-Age people who had died (through fair means or foul) and been mummified in peaty ground across Northern Europe.

Unfortunately archaeology and conservation methodologies in the 19th century were not as sophisticated as they are today. Sadly, many of the ‘Bog People’ were only partially conserved after they had been dug up and very few photographs were taken. We have no image of the Springhill man but a plait of hair, the shirt, brogue and cord from the body were donated to Dunrobin Museum.

Modern science can use radiocarbon dating to determine the age of bog bodies and also attempts to extract DNA have been made. It is now possible to identify where a person might have wandered and also what they ate for their last meals.

To get an indication of what our bog body may have looked like we can turn to an illustration from Glob’s book. Bockstein Man was another 14th century bog body, found in Sweden, and the pictures show the clothing he wore. 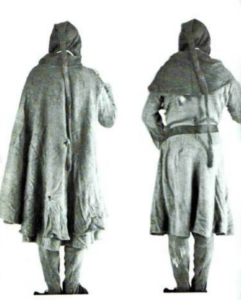