We received a photograph from the Secretary of our neighbouring heritage society showing an outdoor church service taking place, with Rogart folk sitting about on the grass. 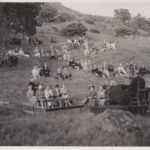 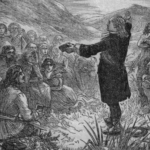 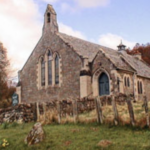 The day, in June 1960 was part of a great celebration and praise which drew on a fractured history, now healed.

The United Free Church came into being as a result of a split between the ranks of the Free Church in 1900, which created some animosity within the parish. A House of Lords’ ruling made the Rogart United Free church homeless and so the breakaway group met in local homes and sometimes in the open air. By 1906 fundraising was started to build a fine new church at Pitfure, a feat which was completed by June 1910.

And so it came that in June 1960 the Jubilee celebrations were held. Three services took place – all conducted by Rev William Sutherland of Sefton Park Church, Liverpool (a son of the parish). In the afternoon was a special children’s service with Alexander Campbell, Eiden and Margaret MacLennan, West Langwell joining the Rev John B Imrie in the pulpit.

The climax to the day was an open-air evening conventicle upon the hillside behind the church, with the sun setting over the western hills. The Northern Times described it as “a scene to inscribe itself on memory for all time to come” and this proved to be the case, as even today local people recall the event and recognise themselves, friends and parents.

The jubilee celebration of the Pitfure Church harkened back to older traditions of open-air preaching, when religious practice could be restricted or even banned and what today might be considered as civil disobedience occurred.

The Evangelical Repository relates a tale from the Isle of Skye, where “the proprietor, McLeod of McLeod not only refused a site for the church, but interdicted the people from meeting under the canopy of heaven, though his tenants, on the very moors they rent from him, or even on the roadsides or byeways – holding that he is Lord of the soil, and therefore entitled to prevent God’s creatures from enjoying that soil for any purpose which he does not approve. He will let it out for culture, and give houses in which to eat and drink and sleep, but not a spot on which to build a house of God, to worship.”

The community sought a religious inquiry as to whether they could meet on a beach within the high Water Mark? “And there, in the winter, in the storm is now approaching they are to meet – safe at the side of the stormy ocean down beside the great laird. The ocean, indeed, covers the spot at times, but there is a little respite; when the tide is out they may put up a tent, and then meet for the worship of their God.”