A few years ago I was taking a walk down the Rhians opposite Sciberscross. The windfarm was being built at the time. I was interested in exploring the greens. They are all that remains of the settlements cleared in 1819 to create the Dunrobin glen sheep farm for the Estate. Each green has its enclosure wall and substantial stone ruins of the homes still remain. 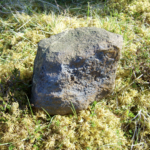 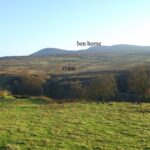 Information of who the early occupants comes from the oral history archive in Edinburgh, recorded in 1955 by Calum MacLean, speaking to George Murray Morness.

Also a news item in a 1941 Northern Times, (reporting on the death of a man Murray in Craggiemore who had travelled from the United States on a visit to relatives, but could not return because of the war,) records that his Murray people were cleared off the Rhians. They then settled behind the Drynoch as grass keepers for Toroboll Sheep Farm. When a boy he had to walk from this remote spot to attend Culdrain FC School. From this source we get the information that on the bottom Rhian lived the Murrays. Above them were the Hamiltons and on the third Rhian were the Macdonalds. The late William Mackay, historian, once told me that my granny Macdonald’s folks were evicted from the Rhians and moved to Banscol. Also in Banscol were the Campbells cleared of Aberscross about the same time: Danny Campbell the smithy folk and Campbells the garage in Golspie.

Following the burn dividing the Rhians from Tannachy hill and near to the river in amongst the heather I came across a curious stone. It was the size of a small boulder capable of being picked up but what caught my attention was that it seemed to have a lot of iron in it. Aware that the art of iron smelting was common in Upper Strath Brora, I wondered if this stone had been bound for a smelting process and had been dropped. We will never know. We read that bog iron was the source for metal workers but perhaps the people were aware of a seam of iron rich rock which they used.