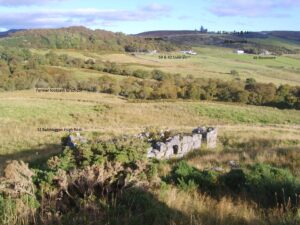 The heart of Rogart parish lies around the vicinity of the Old parish Church of St Callans. This is where the main parish school was built and also the Drill Hall. We have chosen an image of Blairmore to emphasise this.

The old houses and the names associated with them over the years, beginning with identification from the 1940s, are listed here.