Welcome to the musical heritage of Rogart!

Rogart has a long and strong musical tradition with notable pipers, violinists and accordion players being nurtured in the parish and surrounding area. Today musicians have many opportunities to play traditional music in concerts, ceilidhs and dances up and down the county, but Rogart remains a hub of musical inspiration. 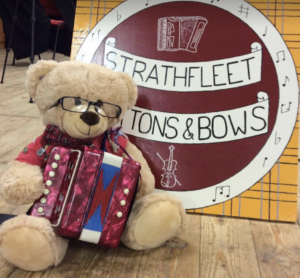 Two groups use Rogart Hall for practices. The Strath Fleet Buttons and Bows group was formed in 2007 by Monica MacLean (accordion) and Tricia Andrew (fiddle). It started off as a beginners’ group, to encourage players of all ages to play their instruments – fiddle, accordion, keyboard, drums. It has now expanded and is an Intermediate/beginners group with membership of 45, aged 8 to 83. The group meets every two weeks at Rogart Village Hall.

Buttons and Bows have recorded a CD of their music which is for sale at events.

The second group, The Sutherland Accordion and Fiddle Club, has been going since 1982. When it started the Chairman was Jock Sorley, John Macdonald vice-chairman, secretary Violet Colquhoun (née Sutherland) and treasurer Sheila Stewart (née Ross). On the first night 32 people turned up and over the years the group has grown from strength to strength.

We are storing local music for two main reasons:
a) for our Heritage Society, so that we can keep an archive of local musical material;  and
b) there will be a separate web contact for the Sutherland Accordion and Fiddle Club where the club can advertise what is going on.

But first we will have a file of the tunes printed in the book now under compilation by the Accordion and Fiddle Club. It contains tunes from the club archive that were passed on to the club and also the tunes composed during our Tune Composition Contest of January 2016, as well as some from a similar event in 1987.

We have also included tunes composed by the late Bert Sutherland and recently discovered on tape and given to our former Chairlady Penny Calvert.

The music in this file is not professionally recorded but in a manner suffice to give an indication as to “how the tune goes.”