Does old mythology explain why wild goats at Morvich are given special protection? Our famous wild goats are popular with locals and visitors alike. But how did they get here and what is the story behind them? 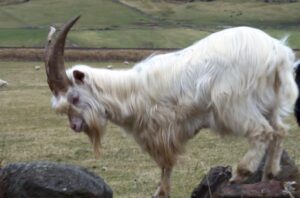 An old legend says that if the goats in Rogart die out, then the sea will break through the causeway at The Mound and flood back up to Morvich, where it used to reach before the road was built 200 years ago. It has been suggested that this might be why the goats are given even more protection – with the erection of warning signs to drivers of wild goats in the road.

But how did they get here? According to local historian, John Macdonald, goats had been historically kept as livestock until the more profitable sheep were introduced into the area. So, are these descendants of domesticated goats that escaped or were set loose? Or have these goats’ ancestors been free-roaming for perhaps centuries?

A traveller in 1865, Henry Hall Dixon, reported seeing at The Mound: “The goats and kids can hardly crop the lichens and moss on it, and, falling off, leave their skins to their country as purses for the Highland Regiments.” This seems to contradict the animal’s well-known sure footedness!

We do know that the feral goats flourished until the 1940s when, during WW2, encampments of Indian soldiers were stationed behind Golspie and elsewhere and the goats began to disappear. When only one billy survived Nathaniel Murray, then at Morvich Farm, felt sorry for the lonely old goat and bought two nannies at a Lairg Sale. This revived the herd again. 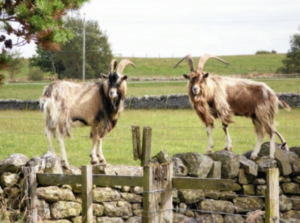 Following our Facebook posts about the Morvich goats Jean Murray and Lizzie Thompson came up with another, more practical, reason for the goats’ presence.

Jean asks “Were they not brought in to keep the sheep off the steep sides of the rocks? Where pockets of lush grass enticed them down, they either got stuck and had to be taken out by someone hanging on a rope or the poor sheep fell to its death. The goats, being more agile, ate the tempting grass which then stopped silly sheep getting into bother.” Lizzie confirms this idea.

That theory chimes with George Murray’s recollection when he spoke to John Macdonald in 2000: “They were of a blue grey colour and stayed on the rocks, never venturing onto the arable” unlike today when the goats can often be seen grazing alongside the sheep in the lush pasture.

So perhaps when Nathaniel Murray bought some new nannies for the lonely last billy, he wasn’t being sentimental it was an important part of ensuring the safety of his own stock? 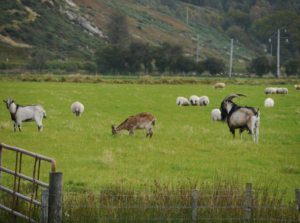