In 1901 a crofter was ploughing a field at Achvrail, in Rogart, when he thought that he had found an old curtain ring.

It was only when he took his find to the Reverend Dr Joass, a minister and antiquarian of Golspie, who had established the archaeological collections at the Duke of Sutherland’s museum at Dunrobin Castle. On realising the importance of his discovery, the crofter gave up the armlet to the Sutherland Estates and it remained on public display at Dunrobin until 1977 when the museum was forced to close owing to disrepair.

In 1986 the ‘Achavrail armlet’ as it is now known was offered for sale to the Royal Museum of Scotland, to raise funds for the renovation of Dunrobin Castle’s museum building, collections and displays. The armlet can now be seen in Inverness Museum and Art Gallery after Inverness District Council managed to save the piece from export abroad. 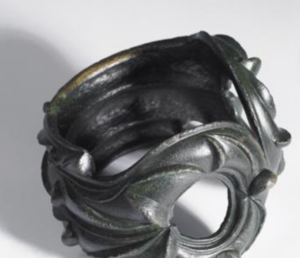 The massive bronze armlet weighing almost 800g dates early 1st millennium and is penannular in form, and cast with an external high-relief decoration of trumpet domes and keeled ribbons around the large circular terminals and along th triple bands. The interior is hollowed and its surface bears numerous tool marks probably from the wax model stage of its production.

The armlet is decorated in a style common in Celtic communities in Europe and is made of bronze – an alloy of copper and tin. While Copper is fairly common in the north of Scotland, the tin would have been traded from as far away as Cornwall.

This armlet would have been bright coppery gold in colour with red glass or enamel ‘buttons’ in each of the two empty circles. It was a symbol of wealth and power.

Heavy armlets like this tend to be found in the north-east of Scotland with a concentration in Aberdeenshire, the supposed area of their manufacture. About twenty such Celtic armlets have survived the passage of time and this is one of the finest examples.

Anderson, J, 1904, ‘Note on a Late Celtic armlet of bronze now presented to the National Museum: with notes on the identification of two other Late Celtic armlets in the museum and on a massive bronze armlet recently found in Sutherlandshire’, Proc Soc Antiq Scot Vol. 38 19, 466 (Text/Publication/Article). SHG1172.