William Campbell was born 14 December 1867 at Carbreck Durness, son of Dorothy (or Dora) Campbell, who was a Domestic Servant or Housekeeper.  Dorothy died of Consumption (Tuberculosis) when William was in his infancy, she was only 23.

Brought up by his grandparents (on his maternal grandmother’s side), shepherd Donald (born in Rogart) and his wife Dorothy MacKay, he had become a Pupil Teacher in Durness by the 1891 census. By 1898 he was employed in Rogart as the Schoolmaster.

He was married twice – firstly in 1898 at Abernethy & Kincardine to Helen (Nellie) Russell MacIntosh (or MacKintosh), a farmer’s daughter.  They had children William Eric (referred to in the diaries as ‘Eckie’?), James Walter and Donald Russell (referred to in the diaries as ‘Russell’. After Helen died in 1902, aged 31, he married Annabella Black in 1905, Inverness. Together they had Agnes Annabella.

The diaries reveal the Schoolmaster’s wide-ranging interests and unfailing curiosity: from investigating the ancient earthen mounds of the district, to acquiring artefacts from around the world, like a boomerang! They also reveal the more mundane aspects of daily life: planting and harvesting of crops, paying the bills and there are even some records about teaching school and the lives of the children he taught. He writes movingly of the Boer War and the Great War and how they affected individual families. 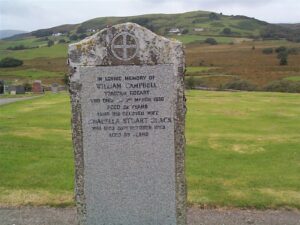