Drumanairgid ‘druim’ is rounded hillock or a back, ‘airgead‘ is silver so the place means ‘silver hillock’. 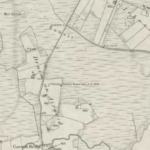 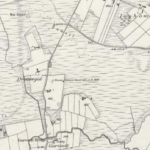 Feature 1. Field System. Bronze/Iron Age. Grid Reference: Centred on 274147 906396 (5m). HER Reference: MHG40422 (part of). On 1st Edition (1872) and subsequent OS maps.  An extensive field system of prominent clearance mounds with some stone visible beneath heather and/or grass. The mounds range from 1-5m in diameter and stand up to 1m high. Those on the lower ground are generally heather-covered and those on the higher parts and the crown of the hill are covered in grass. The cairn field extends outwith the site to the north-west, northeast and south-east, forming part of a larger field system. Within the site there are approximately 35-40 cairns.

Feature 5. Field System. Bronze/Iron Age. Grid Reference: Centred on 274060 906238 (7m). HER Reference: MHG10530 (part of). On 1st Edition (1872) and subsequent OS maps. Part of the same field system as Feature 1 (above) but separated from it by an expanse of boggy ground, they connect outwith to the east. Within the site, there are 7 clearance cairns up to 5m diameter and 1m high. All of the mounds are covered in grass and occasional stone is visible in some of them.

Feature 6. Stone & Turf Bank. ?early 19th Century. Grid Reference: 274908 906146 to 274043 906148 to 274002 905908 (6m). On 1st Edition (1872) and subsequent OS maps. A substantial, 1m wide and 1m high, grass-covered stone and turf bank extends eastwards from the east side of the Brora-Balnacoil-Rogart public road, turns at right angles south towards the southern margin of the survey area. It has a ditch on its north and east sides and encloses a grass field. It would have been constructed as part of the post-Clearance improvements, to bring moorland into cultivation.

Feature 7. Building. ?Pre-Clearance/early 19th Century. Grid Reference: 274033 906082 (6m). HER Reference: MHG28113. On 1st Edition (1872) and subsequent OS maps.  The remains of a stone-walled building extend westwards from the stone and turf bank of Feature 6 (above), although its southern side wall extends for 3m beyond the bank. It is recessed into a knoll on its north side and it measures 13m x 4m, with an apparently open eastern gable end. The walls stand up to 1m high, are 0.7m wide and the side walls trend 088°. It is not clear if the building stood before the bank was built or is contemporaneous with enclosure.

Feature 9. Wooden Post. ?20th Century. Grid Reference: 273957 905912 (6m). A railway sleeper has been inserted into the ground in the improved grass field as a wooden post. It stands 1.5m above ground surface level. Its purpose in unclear.

The 1841 Census records a family of Baillies at Drumairgid. John Baillie, aged 40, a tenant, is married to Margaret and they have 5 children. Also at Drumairgid is William Mackay, aged 75, a Pauper and his daughter, Alexandrina, aged 20 (age is likely to be higher, as ages were rounded down to the nearest 5 years in this census alone).

In 1851, the Census records that Alexandrina, aged 35, born Rogart, is a Servant and living alone at Dremergid. It is likely that her father, William, has died. The Baillie family are still all present at the croft; John, born Golspie, is a Lotter of 3 acres, his wife, Margaret was also born in Golspie. Their children are: Jane (aged 20, Servant), Cathrein (sic) (aged 18), Alexander (aged 16, Labourer), William (aged 14, Labourer) and Marrion (aged 12, Scholar). All of the children were born in the parish of Rogart. The final resident at Dremergid in 1851 was Christian Gunn, a 69 year old widow, born in Kildonan, who was a formerly a Pensioner’s wife, but now a Pauper.

The Baillie family remained at the croft through the 1861, 1871 and 1881 censuses, with the addition of a new daughter in 1853. Eldest daughter, Jane, married John Melville of neighbouring Clyne parish in February 1875. John died, aged 91 in 1887, leaving his wife, Margaret, as head of the household in the 1891 Census. Margaret died in 1894. The 1901 Census records that 59 year old Marion Baillie, John and Margaret’s second youngest, unmarried daughter is residing and working at the family croft Druimarigeid, with her nephew and his family.

Acknowledgements to Nick Lindsay and his archaeological study of Drumanairgid. For the full survey click here.