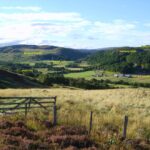 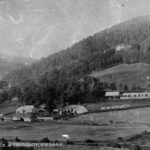 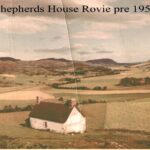 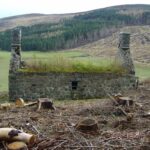 Shepherd’s house emerges from the forest at Rovie Farm 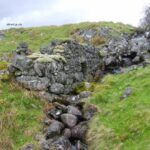 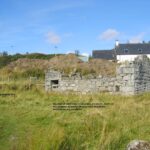 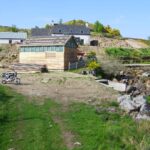 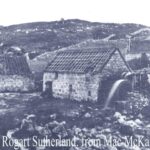 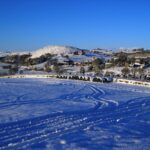 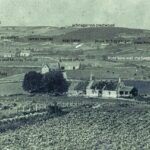 1 view of Blarich and Torbreck 1 a same view c 1890`s. note Tressady lodge as new, 233 Torbreck, McKenzie`s and old house in front. Torbreck School far left.
2 View from the shepherds house for Rovie farm prior to hill ground being planted c 1950`s. The image must be around this time as there seems to be the first council houses. Note the stooks of corn on Rovie field. This part of the farm was Rovie Craig, cleared to create the farm. Some of the people seem to have been given land in Inscape. (Mrs Bowran`s memoirs.) 2a Forward 50 years. The forestry has matured and is harvested. The shepherds house re appears, but the slates has been removed with the inevitable consequence. The last child born in it was Zena Moore whose father worked on the farm. The family then moved down the hill to Riverside cottage in the 1920`s. The house was surrounded by Douglas Fir which had grown very well.
The Morness Mill story. Picture A is of the old mill on Grudy which was cleared 1821. It was the mill of Old Colonel Sutherland of Braegrudy. Col Sutherland lived in Culmaily Golspie and had to give it up to accommodate Mr P Sellar. Oral history says that the “ Grudy mill was burnt.” Whither this was an accident or part of the clearances, we do not know. But after leaving Culmaily The Col went to live in Pitfure, where the resident tenant D Mackenzie, “renounced his lease to accommodate Col Sutherland”(Adams 1/71. )
2 Morness must have come under the small estate of Pitfure as the Colonel had a new mill built in Morness to replace the Grudy mill. The mill remained a ruin and rubbish tip for most of the 20thC. This image shows the house after being renovated by Col Finlay.
3 By 2013. Mr Mitchell has bought the croft and has removed the mill and installed a water turbine, using the power source of the old mill. Now the house too is in the process of being rebuilt.
4 An image from Mac Mackay of Invercargill New Zealand, whose ancestors had left Laide to go to N Z in the 1880`s. This image of the mill working was in his family archive. Mac has visited Rogart to find where the mill stood. The image shows that by this time, the roof is in need of repair. The building to the left, only the foundation remained by the 1940`s. The house looks much as I remember it when the Williamson`s lived there c 1943. Gordon Newman live in it prior to Col Finlay. Previous occupants were the Elfinstone. The census of 1901 had the crofter being Donald Mcintyre age 42, born Glenelg Invernessshire. The census has entry “Whole sale merchant in whiskey,” stroked out and replaces with “crofter.” His sister Kate aged 36 in 1901 lived there most of her life. The Williamson`s experienced strange psychic happening when they lived there. (Thomas Williamson in Rogart book, by J Macdonald. )
3