Lance Corporal Alexander Macdonald was killed in action 10 April 1918 in France. He was 28 years old. 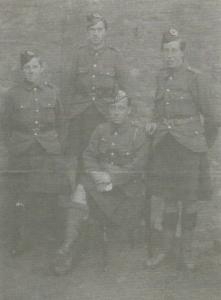 The picture shows a group of Seaforth Highlanders, the family believing it was a militia unit they were part of.  In the picture Alex is thought to be centre front and his brother Robert is on the right. Alex was a Territorial and if he volunteered he would be permitted to wear the Imperial Service Badge which he wore on his right chest. 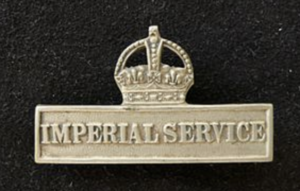 Born in 1890 at Rogart to parents Donald Macdonald (son of Alexander Macdonald and Anne née Sutherland) and Barbara Matheson of Achnahough, East Langwell, Rogart. He enlisted in Rogart and served in the 1/6th (Morayshire) Battalion, Seaforth Highlanders T.F. His Regimental Number was 267254.

He was awarded the  Military Medal, a military decoration awarded to personnel of the British Army and other services, below commissioned rank, for bravery in battle on land. It was the other ranks’ equivalent to the Military Cross.

On 28 September 1918 at 4.30pm The Corps Commander decorated one Officer and nine men, including Alexander: “For bravery shown during Raid on German trenches on night of 16th September 1916.”  He was also awarded the Territorial Force War Medal.

The raid on the German trenches

In September 1916, according to the official war diaries, there was quite a push by the Germans. In response, starting from billets in La Miquellerieto to hold a canal bank between Busnes and Robecq: A company taking left side, B taking right, C the reserve and D HQ details at the rear, Map reference R28 C.5.5 alongside 5th Seaforths and Argyll & Sutherland Highlanders C Company in support at R33 and 6th Seaforth D company at R32.

There was only one footbridge across this section The Canal (Canal de Lawe or Lalleau). The Seaforths requested that it be blown up, but the engineers made a poor attempt and fled. This was commented on by the officer writing about them stating that the conduct was worthy of censure. This failure would later come back to bite them as the Germans used this bridge during their attack.

The Germans broke through further north putting pressure on the left flank leaving 2 platoons and some men from other Scottish regiments surrounded, the line then withdrew to map ref R36 and the HQ moved to Vertbois Farm.

It was during this episode that Alexander Macdonald had exhibited bravery for which he was awarded the Military Medal.

Alexander was brother to Donald, Annie, Jane, Charles, Robert George, Maggie and Barbara. His brothers and sisters, together with his mother, were to be his legatees when he was killed in action. His brother Donald was the recipient of his War Gratuity.

Alexander is commemorated on Stone 112 B of the Loos Memorial, France, the Rogart War Memorial and on family headstone in St Callan’s Old Kirkyard, Rogart. His death is also recorded in the Clan Donald Roll of Honour Book page 146.

Grateful thanks to Judy Macdonald, Alasdair Will and The Scottish Military Research Group – Commemorations Project for information on this page.