Captain (Local Rank) Alfred William Will MC, Temporary Lieutenant was killed by mutinous troops, on 25 May 1918 at Khaneh Zinan (Kana Zenya) South Persia. He was aged 27. 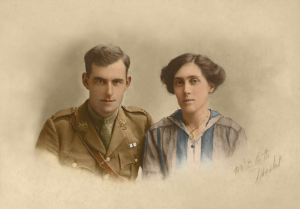 Alfred W Will and Marion Sutherland, colourised by Tom Marshall of PhotograFix

Born in Brora on 30 April 1893 to parents Alexander (Police Constable) and Barbara McRobbie Will (subsequently at the Howe, Tulloch, Bonar-Bridge).  Alfred Will married nurse Marion Sutherland on 3 May 1917 at the United Free Church, Rogart. They had a daughter, Margaret Oliver Will, who he tragically never met due to his untimely death.

Alfred had been occupied as a Police Constable on enlistment (he retired from police June 1915) and was titled Male Nurse on commission. He had also served with British Red Cross in Serbia as a male nurse. He was awarded Red Cross Medal 1st Class with Balkan Bar.

Alfred enlisted at Dornoch on 29 June 1915, possibly in Royal Army Medical Corps (when his home was given as ‘Police Office, Pitfure, Rogart’) and went overseas to France on 4 September 1915 to No.3 Casualty Clearing Station. He applied for commission in April 1916 with 7th Seaforths. He subsequently returned to the UK for training on 4 November 1916. Commissioned 1 March 1917 as 2/Lt Special List (Interpreter), he then joined the South Persian Rifles 26 June 1917. 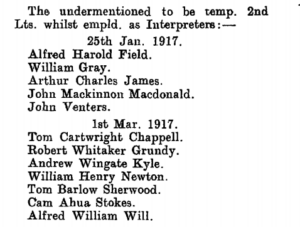 Captain Will was awarded the Military Cross. The citation reads: “for gallantry and able leadership on the 10th and 16th May 1918, and by his example he held Khaneh Zinian fort against superior numbers of well armed tribesmen from 18th to 25th may. this officer had previously been wounded 5 times in France.” 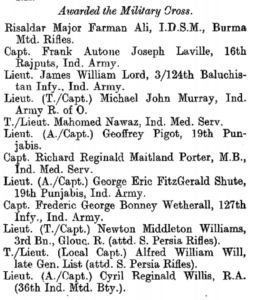 Alfred was buried at Shiraz British Cemetery, Shiraz, Iran on 15 September 1918 and the body was moved on 13 August 1919 to Tehran War Cemetery I.F.3 Joint Grave. 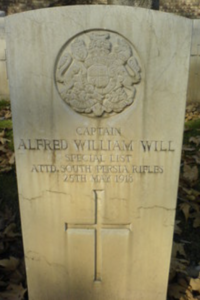 Grateful thanks to Alasdair Will for providing information and photographs about his Great Uncle.