Lachie and Donnie were sons of George Murray and Mary Stewart, Morness, Rogart.

Private 403291 Lachie Murray served with the 2nd Cameron Highlanders and was killed in Italy, during the Battle of Rimini, on 6th September 1944. He was aged 39 years. He was buried in plot XX, D, 3 of the Coriano Ridge Commonwealth Wargraves Commission Cemetery where his name is listed as Laughlan. He is also commemorated on Rogart War Memorial.

The Battle of Rimini took place between 13 and 21 September 1944 during Operation Olive, the main Allied offensive on the Gothic Line in August and September 1944, part of the Italian Campaign in the Second World War. Rimini, a town on the Adriatic coast of Italy, anchored the Rimini Line, a German defensive line which was the third such line forming the Gothic Line defences.

The British Imperial forces (2 Camerons was brigaded with two Indian battalions as part of 11 Indian Infantry Brigade, 4 Indian Division) led the assault.  The fighting, inland and south of Rimini on the Adriatic coast – close to San Marino – was across extremely difficult terrain. The clay underfoot is cloying and very heavy going, whilst there is also a series of steep limestone ridges, which were required to be taken.

Military historians agree that the actions of 2 Camerons were outstanding as they took several of the strong points — but their casualties were heavy. Lachie was amongst them.

“Rogart mourns deeply the death in action of one of the finest of its young men, Pte. Lachie Murray, Cameron Highlanders, and formerly of the Lovat Scouts.  Lachie, as he was always affectionately known, volunteered for military service very shortly after the outbreak of war and joined the Lovat Scouts, the regiment in which his father had already served in two wars.  Last December he was transferred to the Camerons and in a very short time he was sent overseas.  He met his death in the early days of this month.  Lachie was a thorough gentleman, greatly loved by all his companions – a faithful servant to his employers.  He was possessed of a big broad sympathetic mind and of a fine outlook on life.  Lachie was not of a fighting nature, but he freely and willingly gave his service to his country and the cause of freedom; and like so many another who had much to give, he gave it willingly.  The sympathy of his many friends in Rogart and elsewhere goes out in a warm fullness to his parents, sisters and brothers (two of whom have been on war service from El Alamein till now) in their great sorrow and loss” (Northern Times September 1944). 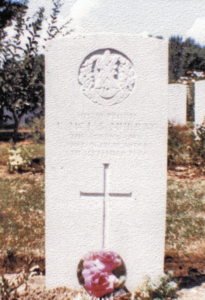 This photograph was taken during a visit in July 1980 by Lachie’s niece Marie and her husband Norman Morrison. Marie took this photograph after placing the floral globe on her uncle’s grave. Marie is the daughter of Lachie’s brother James, Drumbuie. “His many friends in Rogart and neighbouring parishes heard with deep regret of the passing of Donnie, youngest son of Mr and Mrs George Murray, Morness, Rogart. Though he had contracted a severe illness on war service, high hopes of his recovery were held almost to the last. Donnie volunteered for military service very early in the war, and after serving a course of training in this country went overseas with the 51st Division. As a driver he served through the campaigns in Africa, Sicily and Italy, returning to this country with the Division to train for the attack on Europe. He volunteered to go overseas again and bravely carried on till health reasons forced him to give up. All through his long illness he showed great courage and patience bearing his difficulties in a wonderful way. Donnie was a most friendly boy in every way and had many friends, for his lovable cheery manner endeared him to everybody. Erect and manly in his carriage, so he was in all his life and his passing at so early an age is all the more regretted. To his parents, brothers and sisters in this, their second sore bereavement due to the recent war, the deepest sympathy of many friends everywhere goes out.” (Northern Times 4/1946) 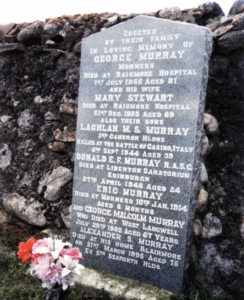 Thanks to Jean Sutherland, Elgin and Marie Morison for photographs and information; and to Donald Adamson for additional material.