Born in Rogart on 26 May1886, third son of Donald Murray, Mason, of Culdrain, Sutherland, and his wife Jessie. He entered Robert Gordon’s College, Aberdeen from Rogart Public School, aged 17 in 1902. He lived c/o 44 Thomson Street, Aberdeen.

Murdo matriculated Aberdeen University in 1905 and graduated M.A.,1908; he subsequently obtained a good appointment as Assistant Teacher at Leith. In pre‐war days he was a noted athlete, and a well‐known figure and competitor at all the Highland gatherings.

When the war broke out Murray was one of those who early answered the call of their country. On 5 September 1914 he joined the 5th Cameron Highlanders (Lochiel’s Camerons) and his regimental number was S/11406. After training in England he went with the regiment to France. He and his brother went “over the top” on that terrible day at the battle of Loos, 25 September 1915; he was posted as “missing” and later on as “presumed killed”.

His name is recorded on the Loos Memorial, Panel 123, Column 1. 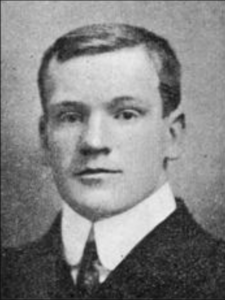 Grateful thanks to Ann Park for her research and to Robert Gordon College for Murdo’s picture,