On 27 March 1918 Lance Sergeant Walter Robson was killed in action in France. He was 32 years of age.

Son of William Robson (shepherd) of Torroble, Lairg and Diana née Mackay of Culmaily, Golspie, Walter had been born in Brora. He was connected to the MacKay family, Muie East, and the Sutherlands of Claggan, Muie. The family lived at Polly, Clyne and later at Mudale, Farr, then Golspie before moving to Lairg.

He had enlisted in Glasgow where he had been employed as a Policeman with City of Glasgow Police. His regimental number was S/13591 when he enlisted in 14th (Service) Battalion Argyll and Sutherland Highlanders.

Walter is commemorated on the Arras Memorial, Bay 9, France.  He is also memorialised on the Lairg and Rogart war memorials, on his parents’ gravestone in St. Callan’s Churchyard, Rogart, on the Argyll and Sutherland Highlanders Roll of Honour, The Scottish National War Memorial at Edinburgh Castle and the Glasgow City Police war memorial. 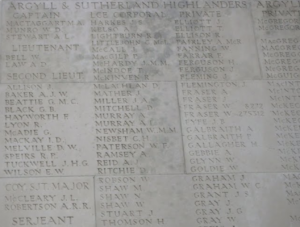