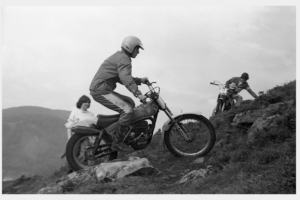 “I’ve spent some time trying to recollect the goings on of the White Heather so here they are”.

“My uncle, John MacDonald, my Mums brother who resides in Rogart to this day, was a clubman rider and former SSDT competitor on an ex- Brian Payne AJS (YNC526), which he bought from Alex Smith. I spent much of my early years with my grandparents in Rogart so the ‘WH’ was an on your tongue word being probably the biggest one day event in the Parish, apart from the annual sheep and cattle sales”.

“Uncle John had become an organiser along with Billy and John Grant and with others whom I cannot remember the names of now. By the time I started riding the event in 1976 on my brand new 348 Montesa Cota, I had been an active spectator prior to then and from memory, to me it could have been a world championship having riders of note travelling up from the North East of England which back then was to a young boy another country. They competed along with the prestige of Scottish riders such as Roger Mount, Ally Macgillivray and riders of their era.

Not forgetting that weekend was a double-header as the Lochaber trial was held on the Sunday, which I suppose made the long trip more worthwhile for the far travelled riders.

I had followed the trial on my late 1960s 250 Cota from the age of fourteen as I was very familiar in getting to see the Rogart side of the trial without riding on the public roads so you can imagine how I yearned to be sixteen and get in there with the stars who could clean what a young boy thought impossible”.

Sutherland continued: “I bought my 1976 348 with a five hundred pounds loan and topped the massive £799.00 purchase price of with my apprentice wages. The bike came from McGowans Motorcycles in Inverness and the salesman was Billy Lumsden who was, at that time, one of the top local riders and rode a Beamish Suzuki. Billy tragically lost his life in a road bike crash in Inverness. His younger Mike continued the tradition, as he rode trials with Gavin Johnson in the early days.

My first ‘WH’ was the 1976 event as I had just turned seventeen two weeks prior and as I think it may have been the first year schoolboys were allowed to ride, as long as our parents collected us for the public highway part of the trial which ran from Rogart North West to the Kerrow and Scriberscross, then down the Glen into Golspie before heading back to the Mound for the Aberscross and quarry group of sections.

The trial route changed yearly although some of the hardest sections were kept, but it did give the diversity with different sections to ride. It may just be my memory but I seem to remember large numbers of spectators at sections which only added to the competition a young sixteen year old from the Highlands could dream of, having spectated at the SSDT and having some of the big names from the SSDT ride in my own backyard.

I rode three White Heathers I think before getting into motocross, but had so much fun riding and practicing with John Moodie, Ray Leitch and the travelling adventures attending all Scottish championship trials. In fact I think the last ‘WH’ I rode in, a young John Lampkin was there on an SWM along with Glen Scholey and Rob Edwards taking in the double header weekend. 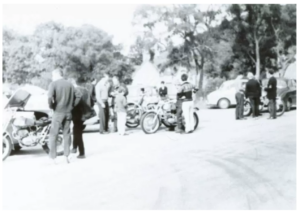 “I have very happy memories of the white heather trial, can’t remember much about the actual event itself, but I do remember this occurrence no names but his initials were I. D. B. M; he liked a serious ‘swallie’ (drink) and as always l was the chauffeur.

We decided to go to the local barn dance and as would happen, we got back to our digs late to find the place dark and lock fast. This gave us no alternative but to gain entry, it unfortunately coincided with the local ‘Bobby’ doing his beat.

It took some explaining I.D.B.M was always a little argumentative after a drink and to this day it was the nearest l have ever been to being lifted by the Constabulary!

Iain Lawrie captured the action in 1979…

Ray Leitch who lived at Culloden, near Inverness:

“My very first White Heather trial I ever rode was in 1976 and I was number 1, but I lost the kick start on my Montesa Cota 247 half way through the event. Lots of ‘bump starts’ later and I finished about second last! I got betetr after that though.

I was sponsored by ‘Cawdor Castle Tourism’ and my brother Sid hand painted their monogram on the tank. That is the Bultaco you see here supplied originally by Stodarts of Oban, but later fitted with the Steve Wilson frame and swinging arm.

Those are Marzocchi air shocks which were modified from a set off a KTM motocross bike. Also riding round the trial with Rob Edwards was for me the highlight of all the White Heather trials I competed in”. – Ray Leitch

“My first ride in the White Heather was I think in 1975, in 1977 I returned, travelling with my elder brother Peter and Graham Smith of Hawick, who was then an up and coming rider working towards his peak of winning the Scottish championship a few years later, in Graham’s Volkswagen camper van.

A few minutes before the start, opposite the Rogart Hotel, a small crowd had gathered to watch Willie Dalling who was on a 348 Montesa at the time, flailing away with a foot pump to square up his rear tyre on the rim. Suddenly an almighty bang, reminiscent of the one o’clock gun going off at Edinburgh Castle, reverberated around the village, as Willie’s inner tube exploded inside the tyre.

Being a strong and sometimes fiery character, you could almost see the steam exuding from Willie’s collar as, without a word, he unbuckled his watch and handed it to his wife Creena before starting the task of replacing the tube.

Meanwhile the audience turned away in respectful silence to leave Willie to work off his temper with the tyre levers!

That year was the first when Rob Edwards came to Rogart to take on and of course beat Scotland’s finest of the time, Alan Poynton, John Winthrop, Robin Cownie et al, and local favourite John Moodie from Rovie Farm. I collected a first class award on my TY175 Yamaha.

The trial was a heck of an adventure, after an early start it must have been past 5 o’clock when we were tackling the final section, before packing up and joining the charge towards Fort William for the Lochaber trial the next day – Great days!” – Simon C. Valente 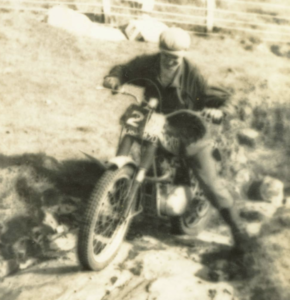