Our guest contributor, John Moffat (Trials Guru) brings his meticulous research on the Rogart motorcycle trials to a close. 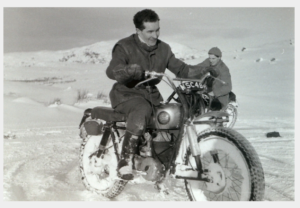 Bill Grant on his DOT

“I recall Rob Edwards offering me his spare front brake for the following day’s trial after the linings came off mine on the 348. I should have taken it as riding without a front brake was a bit hairy – not to mention getting down from the top of Sciberscross.

Still the strongest memory of the trial is Willie Dalling using a footpump to square his rear tyre on the rim just before we were due to start. One of the bystanders asked Willie how he would know when he had got the tyre hard enough. Someone (it might have been me) said that when it went bang you would know that it was just too hard, at which point the tube burst. I’m sure you can imagine Willie’s reaction as he set to while the trial departed.

Then there was the rope with a bit wood on the end to go behind the stanchions to haul riders up a waterfall section that many fived. No doubt we’d find that one easy enough nowadays”. – Peter C. Valente 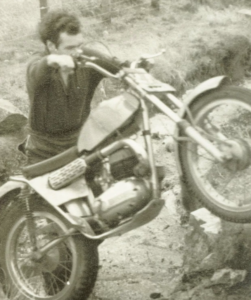 “A great dip into nostalgia remembering the trial at Rogart. I believe it became one of the events that counted towards the Scottish Championship.

I know I took part in it at least twice; you have produced the evidence for that, but I  cannot remember if I rode a third or even fourth time.

By the autumn of 1968 I was only back in Scotland intermittently, as I had started working for British Road Services based in Oxford.

I really liked this trial. Attractive area, welcoming local people, well organised event, with the Club even fixing accommodation. I stayed with a very nice couple and I remember the lady made a terrific breakfast.

And, finally, the sections were mostly rocky climbs, which suited me and, especially, my Ariel”.

“I also remember the trial finished at what I think was the local cattle market. The first time I rode, many people came to join in the general socialising, including a number of pretty teenage girls all dressed in Highland gear. I remarked to one that it was very nice of them to have welcomed us lowlanders by dressing up. Oh no, she smiled, we’ve just got back from a dance competition in Golspie!

I am grateful to see the photographs of me on my Ariel, RFS651, which I still have. I bought this bike from Davy Dryden from Uphall, West Lothian.

I had always wanted an HT5 since, as a kid, I had watched Laurie McLean practising on our pushbike trials area, and when we were all at the E&D clubroom one Sunday night after a trial I overheard Davy complaining that he could not get to grips with it.

So later we agreed a deal. I was very happy and I think I won two or three trials with it in 1967/68 season. I have always wondered if anybody has won a Scottish open event on a Classic 50’s four stroke since then?”. 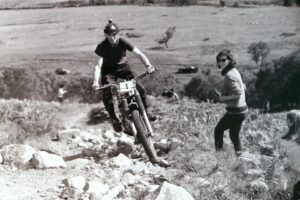 “My first ever competitive trial was the 1976 White Heather. An event that was to kindle a lifelong interest in the sport albeit sometimes interrupted by that nasty thing called work. I learned the rudiments of riding in a local woods and streams in and around Beauly from late 1975 on my fairly decent Ossa Mar, a £300 purchase from A. N. Other! Finding some out some months later that another Beauly lad John ‘Bull’ Davidson who by this time lived in Inverness was right into the sport too and palled around with previously spoken about Billy Lumsden. That led to getting some tips, advice and garnering further interest and being able to get a wee bit more practice in I guess. Anyway, trying to run before I could walk I entered the trial and had so much fun. I have a recollection I was about 38th or so out of about 80 riders. Dropped a barrowload of marks but there were plenty of also rans behind me. I can’t recall but it was probably the following year I became aware of the luminaries such as Rob Edwards being there too although it could have been that very year. Rob, a delightful fellow who I met briefly a number of times including my soon to follow 3 x SSDTs – another case of me trying to run before I could walk, had a great memory for faces and always had a few kind words. Back to the trial, it really was a great mix of sections, people looking on and you really felt part of something especially as a sport newcomer. All these cracking riders coming to participate and little old me being part of it. Just magic! The double-header of being able to shoot off to Fort William the following day , a bonus. Something,I’d forgotten about until I started reading this fine article. I think maybe 3 times or so I participated, Who could forget Robbie Sutherland in the coming seasons who really started to make his trials bike ‘speak’ and made us all envious when he got his 4 stroke CCM. Oh my, the sound! Ray Leitch, a fine rider often in the points. A shoogle here, a shoogle there, but feet firmly on the pegs. We travelled together to a number of trials and believe me, there weren’t many people who could get a Mk 3 Cortina and trailer chapping faster on the way home. Anyway, the White Heather, there couldn’t have been a better intro to the sport could there?” – Dick Mackintosh 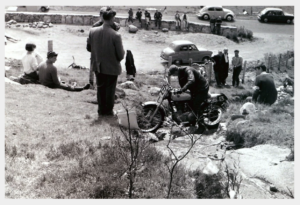 “Well, this article brings back some great memories as Tommy Sandham said, it was a long drive up. Myself and Stan Young did that journey, we left Edinburgh about lunchtime and after a brief stop in Inverness at the West End chippy, non stop to Rogart in time for a couple of pints and it was 10.00 pm closing time in those days.

Seeing the picture of Tommy Milton Jnr, ‘Kerrow’ was one of his favourite sections. I managed it once for a dab, not only did I ride the trial, but was SACU steward a couple of times. On one occasion I came across Jock Fraser on the down side of the ‘Struie’ he had been involved in an accident. All the trials guys that were there duly helped get the bike on another trialer with Jock and his wife in another car.

His car was not driveable so what could be done with his trailer? I had my works van but no tow bar, but a single bike trailer can be wedged into a Ford Escort van with the doors only slightly open. There it stayed all the way back down to Fort William on the Sunday. And yes, the drive down to Fort William was interesting with trials bikes on trailers and pickups at various speeds!

My abiding memory is the way the whole village helped to put on the event”. – Peter Bremner 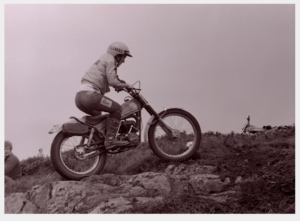 Ian ‘Midge’ Middleton of Dumbartonshire, an organiser of the Loch Lomond 2 Day Trial:

“I have recollections of the White Heather Trial and rode it from 1975 to the last one in 1983.

I was amazed to see the photograph of Geordie Shaw of Perth and Loch Lomond Clubs riding at the ‘Sciberscross’ sections on his Greeves in 1967”.

“That was quite a bit before my time, but I recognised him straight away, even before I saw the photograph caption. Geordie Shaw was great mentor to me and I couldn’t wait to have a go at the Trial, having heard all the tales from Geordie. Sadly Geordie passed away in 1975 when still quite young, probably aged mid-thirties or so.

After a long and arduous drive in 1975 on roads that had not yet been upgraded or improved in any way it was tremendous adventure even just to get to Rogart, the Trial epicentre. There was no Dornoch or Kessock bridges, no improved A82 or A9 roads, and it was very much the long way round, traveling through many small villages and towns.

Once there myself and my two travelling companions ventured into the pub to be greeted by Pete and Simon Valente whose first words to me were..’you look absolutely shattered’. I certainly was bit tired having driven 225 miles on fairly primitive roads in a very slow van. I was even more shattered after the event, but very happy at having completed my very first White Heather Trial.

Even more amazing for me was to encounter the lads from County Durham, Weardale and North Yorkshire who would have had to travel at least twice the distance to get to Rogart. The well known folks from the far South from where I am sitting were ‘Big’ Billy Maxwell, Ray Crinson, Walter Dalton, Rob Edwards, Gordon Butterfield and Colin Ward Senior. After finishing the Trial, the next task was to get everybody packed up and into the van for another arduous drive South on Saturday evening to Fort William, for the Sunday Trial run by Lochaber Club.

The White Heather was always a special and fantastic event, because it was a massive one lap trial with probably about 50 sections or so, and you were lucky to be finished at 5.30-6.00pm having set off at 10 in the morning. It seemed to closely resemble a day in the SSDT. I also remember lunch halts at a local school house which must have been opened up specially for the Trial. With the local ladies providing soup, sandwiches and tea. You had to be quick because time was short to get round the long lap.

The Grants also provided a route card with a sketch map of the route and the names of all the sections and section numbers. This was presumably all influenced by the SSDT processes, which having read the previous articles, the Grants were also already heavily involved with.

Being a very long one lap fifty section Trial it was very challenging, but immensely enjoyable. For me, it was ‘not a walk in the park’ and that was all part of the challenge in taking part and actually finishing. There is probably nothing like it in today’s world, and it was a shame that it finished in 1983, because the younger lads of today are missing out on something really special.

The sections called ‘Quarry’ was always pretty scary for me and they were always the last group at the end of the Trial when you were very tired. The group was just at the side of the main road leading to Rogart. You always had to be very careful to get the best line at the Quarry sections and have a really good blast up the steep rocky and narrow path, because if you were unlucky enough to fail and get a five, there was no way of restarting or going off to the side to get out of the sections.

If you took a five the only way out was to turn around and go back down which would have been a nightmare. That worry was the best incentive to get the right line, open the bike up and make bloody sure you got out the ends cards. I think I got through the Quarry sections without ever getting a five”. – Ian Middleton. 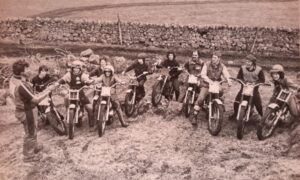 Special thanks to all the contributors, photographers and riders who have shared their memories of the White Heather on Trials Guru.

This article and photo-feature is dedicated to the people of Sutherland in north Scotland and in particular the Grant family of Rogart. It now sits in the Trials Guru ‘special section’ entitled ‘Great Scots’.