On Sunday 29 July at 3pm this beautiful, well-cared for church will be closing its doors for the very last time. Parishioners, friends and families whether regular church-goers or not, are invited to take part in the final service.

The United Free Church came into being as a result of a split between the ranks of the Free Church in 1900, which created some animosity within the parish. A House of Lords’ ruling made the Rogart United Free church homeless and so the breakaway group met in local homes and sometimes in the open air.

By 1906 fundraising was started to build a fine new church at Pitfure, a feat which was completed by June 1910. The architect was Robert J Macbeth of Inverness.

In 1929 most of the United Free Church joined the Church of Scotland, but not without dissension and bad feeling and in Rogart the two congregations remained separate until around 1948 or 1949 when they were united into one congregation.

Weekly services alternated between St Callan’s and the Pitfure Church ever since. However, dwindling numbers of attendees, combined with the costs of maintaining two churches in the parish have ultimately led to the decision to close Pitfure.

The final service will mark the end of an era and will be followed by a chance to chat and have coffee and cake. Everybody’s welcome! 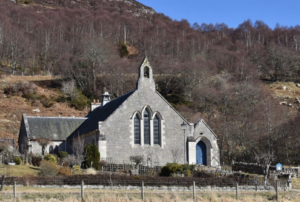