If you have been watching the recent documentary series that highlighted the sacrifice of the forgotten Highland Division at St Valery you will be enthralled by this exhibition.

After Dunkirk, Churchill abandoned the Highlanders to their fate

Much less known than Dunkirk – and not at all celebrated – is the fact that on 4 June, 1940, the day after the evacuation was completed, 10,000 Scots in Normandy launched an attack on the Germans. The consequences were disastrous and it’s too late to award a St. Valery medal to the survivors. But at least we can honour their memory.

Malkie Fraser was a highly regarded man from Garvault, Rogart who never spoke of his experience as a Prisoner of War in Poland. He lived through capture at St Valery, forced marches, hunger, privation and cruelty.

Morven Gabriel, his niece, has put together an exhibition of papers and pictures from Malkie’s wartime experience. Everything had been kept by her Grannie from enlistment papers to notice of his capture – months after she had been informed he’d gone missing.

Using diaries from a fellow-soldier whose experience mirrored her uncle’s, Morven has been able to piece together Malkie’s harrowing time in captivity.

If you do nothing else today, come and see the exhibition. 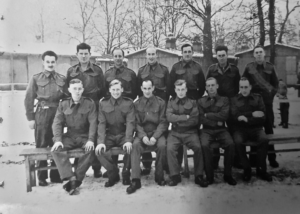